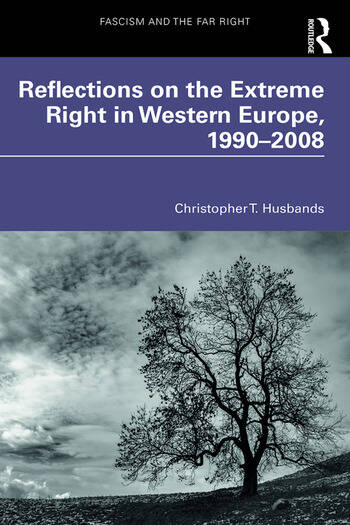 Reflections on the Extreme Right in Western Europe, 1990–2008

During the last three decades or so there has been a significant growth of extreme right voter support, in Europe and elsewhere in the world. The chapters in this book look at an earlier period before most of this increase. Comprised of eight previously published articles or book chapters and two hitherto unpublished studies, this book gives extended accounts of the major extreme right political parties or movements in a number of west European countries, looking both at their antecedents and also at their their support and significance in the 1980s and early 1990s.

The countries covered in detail are France, the Federal Republic of Germany (old and new regions), The Netherlands, Belgium, Switzerland, and Austria. During the last three decades some earlier parties of the extreme right in these west European countries have disappeared into oblivion, to be superseded by replacements; others have survived and flourished. Given the date when most of these chapters were written, they are now to be regarded as contributions to a modern history about the status and relevance of the respective parties or movements. The book also includes an introductory essay that discusses issues arising from the disputed labelling terminology used to describe such parties and identifies themes that feature in the more recent literature about the subsequent and current state of the extreme right in Europe.

The book will be of particular interest to researchers on the contemporary politics of the extreme right in Europe, as well as a valuable resource for those teaching courses on this topic or on general political sociology.

1. What Goes Around Comes Around: A Critical Review of Some Major Contemporary Attempts to Account for Extreme-Right Racist Politics in Western Europe

2. France: The Support for the Front National: Analyses and Findings

3. The Federal Republic of Germany: Militant Neo-Nazism in the 1990s

4. The State’s Response to Far-right Extremism: The Case of Die Republikaner and the German National and Regional Authorities

5. The Netherlands: Irritants on the Body Politic

6. Belgium: Flemish Legions on the March

7. Switzerland: Right-wing and Xenophobic Parties, from the Margin to the Mainstream?

9. Aggregate-data Analyses of Urban Racist Voting: Methodological Limitations, Lessons and Experiences from France, The Netherlands, the Federal Republic of Germany and Switzerland

10. Support for Right-wing Extremism in Western Europe: An Examination of the ‘Wave Hypothesis’ on the Basis of Time Series of Polling Results in Five Countries

Christopher T. Husbands is Emeritus Reader in Sociology at the London School of Economics and Political Science, U.K. Since the 1970s he has published many articles on extreme-right politics in several countries and is the author of a book on the British extreme-right party, the National Front.

Reflections on the Extreme Right in Western Europe, 1990–2008