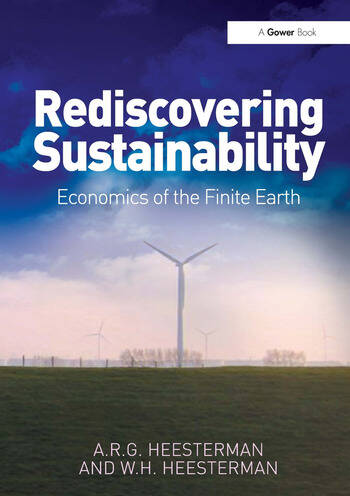 Drawing on historical and current data, this thought-provoking book summarises the pathways to the present predicament and maps out strategies to develop financial and economic systems for a sustainable world. The content is arranged in three parts addressing 'Stylised Market Equilibrium', 'The Real Market Economy', and 'Present Affluence Versus the Future'. In Rediscovering Sustainability the authors help bridge the gap in understanding between scientists and the green movement on the one side and many economists on the other. Greens worry about catastrophic climate change and anthropocene mass extinction. Economists express reservations about spending substantial amounts of money on preventing environmental degradation. Aart and Wiebina Heesterman argue that there are inherent limitations in standard economics which cause blind spots in its environmental economics sub-field, as well as issues to do with simple lack of knowledge. In this timely book, the limitations of the neoclassical economics framework are examined. The authors explore the relationship between Keynesian aggregate economics and financial sustainability, as well as that between scale economies, locational economics and the understated cost of fuel for transport. The impact of economic theory on practice is examined. Conventional economic theory and political compromise bear unhelpfully on an energy market constrained by emissions targets. Rediscovering Sustainability is an invaluable aid to understanding for those teaching, studying, campaigning, policy-making, or involved with the science or politics of environmental and sustainability issues. It is also a book for those concerned with the application of economic theory in any context.

A.R.G. Heesterman was a senior lecturer at the University of Birmingham, UK, where he supervised Ph.D. theses and managed the degree programme in economic planning. He has a degree in political and social sciences from the University of Amsterdam and has also taught and published in the areas of econometrics and mathematics. Before moving to Birmingham, Aart Heesterman was a research officer at the Central Planning Bureau of the Netherlands' Ministry of Economic Affairs. He has authored five books and numerous articles. W.H. Heesterman has degrees in information science and information technology and a PhD in Law from the University of Warwick in the UK, gained researching children's rights. Wiebina Heesterman has assisted in the creation of human rights databases in Tanzania and Zimbabwe. Fully Conversant with the latest climate and environmental research, the authors have travelled extensively in developing countries witnessing how poverty is aggravated by erratic weather patterns.

'Thinking clearly and coherently about how we price fossil fuel may be the most important single thing we can do as a civilization. This book provides a useful primer for understanding the issue!' Bill McKibben, founder of www.350.org and author of Eaarth: Making a Life on a Tough New Planet ’A valuable contribution to climate change and economic policy ideas and debates. Rigorously argued, insightful and provocative.’ John Wiseman, Melbourne Sustainable Society Institute, University of Melbourne, Australia ’This book provides insights and conceptual tools to economists and environmentalists intent on resolving the big picture... Rediscovering Sustainability represents a real contribution to economic theory today in a world where some of the political and psychological inhibitions are alarmingly similar to those prevalent 40 years ago. This makes it a very welcome and useful volume.’ Scientists for Global Responsibility Newsletter, Autumn 2013 ’The strength of this book is not in offering new data on climate changes or environmental impacts of energy consumption. Its main contribution is bridging in an original way the gap between environmental science data and economic strategies and systems for a sustainable world. Rediscovering Sustainability is compulsory reading for those teaching, studying, analysing, or otherwise involved in the nexus between science and policy of the sustainability debate.’ Latin American Journal of Management for Sustainable Development, vol.1 no. 1