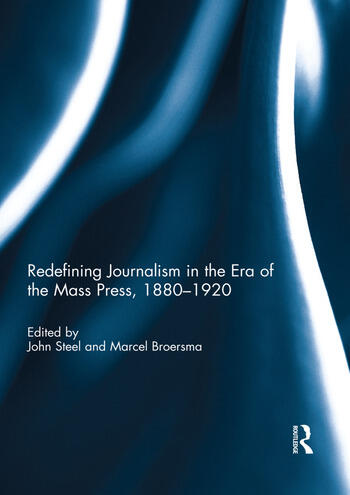 At the turn of the 20th century, the significant social, political, and technological changes that were occurring in society also heralded new roles and functions for journalism as a profession and as an aspect of a burgeoning mass mediated society. Redefining Journalism in the Era of the Mass Press, 1880-1920 examines journalism’s roles, products, and practices during an era of rapid change and transformation, and how these changes within the field reflected broader social, political, economic, and technological changes. The era of the mass press was one within which the speed and impact of change both reflected and contributed to transformations in journalism – transformations that would endure until the rise of the Internet disrupted the field once again. This book was originally published as a special issue of Media History.

Introduction: Redefining Journalism During the Period of the Mass Press, 1880-1920 John Steel and Marcel Broersma

1. The Argument of the Broken Pane: Suffragette Consumerism and Newspapers Jane Chapman

2. Commerce and the Church: The Factors that Shaped New Journalism in the Irish Independent Mark O’Brien and Kevin Rafter

3. Janus and the Journalists Martin Conboy

4. Man of Letters, Literary Lady, Journalist or Reporter? Contributors to the New Mass Press and the Evolving Role of the Writer 1880-1920 Sarah Lonsdale

5. Mobile/Sedentary: News Work Behind and Beyond the Desk Johan Jarlbrink

John Steel is a Lecturer in the Department of Journalism Studies at the University of Sheffield, UK. He is interested in the intersections that occur within journalism, history, politics, and philosophy, and has published work on a range of topics relating to journalism, media and political history and the history of ideas.

is Professor of Journalism Studies and Media at the University of Groningen, The Netherlands. His research focuses on change and innovation in journalism, from both a current and a historical perspective.