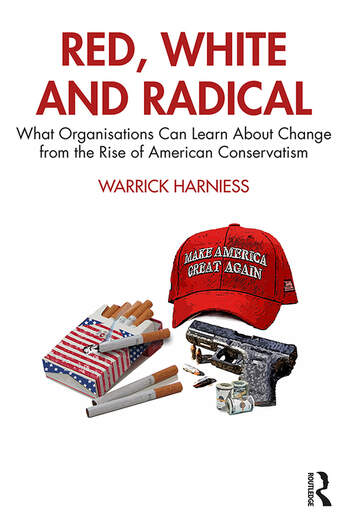 Red, White and Radical: What Organisations Can Learn About Change from the Rise of American Conservatism

Red, White and Radical explores how and why America has become so conservative since World War II. In the process, it offers lessons that professional leaders, regardless of their political stance, should heed if they want their organisational change plans to succeed.

Over the past 70 years, a motley crew of suburban activists, libertarian businessmen, and political opportunists have radically changed America and its national values. The rise of American conservatism is the greatest modern example of cultural change in the Western world. How did they do it – and what can we learn from this? Red, White and Radical is a manual for organisational change. It tells nine stories from American cultural, political and business history that illuminate how conservatives have pioneered change. From these stories, it extracts a change management lesson for professional leaders and explains how to apply that lesson in the workplace.

These nine lessons are organised into a clear change framework:

Along the way you’ll also learn:

Red, White and Radical is not for the faint of heart. If you’re a passionate business leader who relishes the challenge of delivering true organisational change for the better, then this book is for you.

Warrick Harniess is an educator and founder of Scandinavia Stories, a learning and development agency that specialises in creativity, communications and change. His clients include multinational companies and professional services firms, universities and start-ups. He learned his craft during a career at Pearson Education, and as a musician inspired by punk rock and the do-it-yourself ethos. Red, White and Radical is his first book.

Red, White and Radical: What Organisations Can Learn About Change from the Rise of American Conservatism