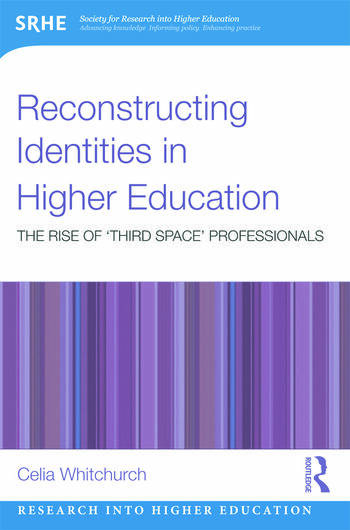 draws on studies conducted in Australia, the United Kingdom and the United States to explore the roles and identities of a growing number of staff associated with broadly based institutional projects such as student life and welfare, widening participation, learning support, community partnership, research and business partnership, and institutional research. Thus, at the same time as professional staff are acquiring academic credentials, some academic staff are moving in a more project-oriented direction. This has effectively created a Third Space between professional and academic spheres in which lateral interactions, involving teams and networks, occur in parallel with formal institutional structures and processes, and give rise to new forms of management and leadership. Yet such developments have tended to occur ‘under the radar’, and have not been fully articulated.

The concept of Third Space is offered as a way of exploring the knowledges, relationships, legitimacies and languages that characterise those who work in less boundaried roles, and the implications of these developments for both individuals and institutions. The ability to problematise and accommodate a series of paradoxes and tensions, for instance between formal and more open-ended structures and relationships, would appear to be at the heart of working in Third Space. Individuals also grapple with the fact that Third Space can, at one and the same time, be a safe haven for experimentation and creativity, and also a risky space in which there is likely to be contestation and uncertainty.

The text is addressed to professional and academic staff who, by design or default, for long or short periods, find themselves working in Third Space environments; to those to whom such staff may be responsible, including senior management teams; and also to researchers interested in changing identities in higher education.