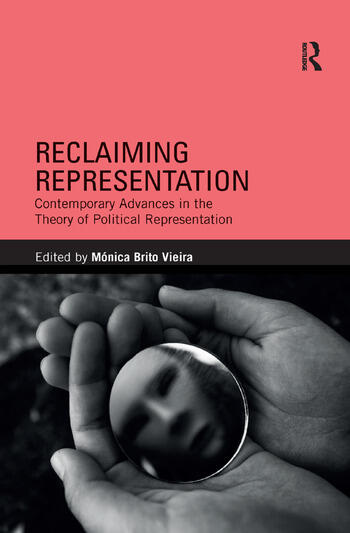 This volume gathers together chapters by key contributors to what amounts to a "representative turn" in political theory. Their approaches and emphases are diverse, but taken together they represent a compelling and original attempt at re-conceptualizing political representation and critically assessing the main theoretical and political implications following from this, namely for how we conceive and assess representative democracy. Each contributor is invited to look back and ahead on the transformations to democratic self-government introduced by the theory and practice of political representation. Representation and democracy: outright conflict, uneasy cohabitation, or reciprocal constitutiveness? For those who think democracy would be better without representation, this volume is a must-read: it will question their assumptions, while also exploring some of the reasons for their discomfort.

is essential reading for scholars and graduate researchers committed to staying on top of new developments in the field.

Chapter 5: Toward a Mobilization Conception of Democratic Representation

Chapter 7: The Democratic Tenor of Representation

Mónica Brito Vieira (Ph.D. Cambridge 2005) is a Senior Lecturer at the Department of Politics of the University of York. Her overlapping areas of interest are intellectual history, the history of political thought, and contemporary political theory. In recent years, her research has focused on the philosophy of Thomas Hobbes and on the history and theory of political representation.

'Reclaiming Representation is the first collection of essays to put the "representative turn" in political theory in proper perspective, by bringing together some of the authors that have most contributed to such a "turn", and making them reflect on what political representation entails, what makes representation legitimate, and how it can be reconciled with democratic ideas of self-government. Each contributor offers an original reflection on how recent debates have reshaped both our conceptual and normative views of what political representation is and what it does, challenging in the process old certainties about the relationship between representation and democracy, or about the mirror-like view of how representatives’ decisions must reflect, or be congruent with the already fixed opinions of the represented. In her insightful introduction, Monica Brito Vieira offers a most useful reconstruction of the coming about of the "representative turn", and weaves the book’s contributions into a convincing narrative, starting from Hobbes’s paradoxical formulation that "the king is the people", to its democratic inversion, that "the people is king", thus showing the central place that conceptions of representation play in modern political theory by engaging with ideas of sovereignty, people and authority.' - Dario Castiglione, University of Exeter

'What does it mean to put representation—rather than, say, participation or deliberation—at the center of our theories of politics and democracy? And if representatives construct the identity and interests of the represented, then what can make representation legitimate? Addressing such questions with clarity and nuance, this carefully structured volume offers both an excellent introduction and stimulating contribution to recent theories of political representation.' - Mark B. Brown, California State University, Sacramento