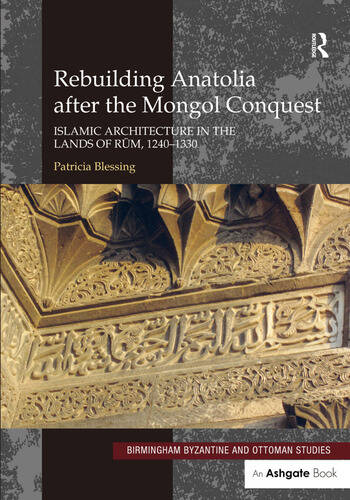 Rebuilding Anatolia after the Mongol Conquest: Islamic Architecture in the Lands of Rum, 1240–1330

This book is a study of Islamic architecture in Anatolia following the Mongol conquest in 1243. Complex shifts in rule, movements of population, and cultural transformations took place that affected architecture on multiple levels. Beginning with the Mongol conquest of Anatolia, and ending with the demise of the Ilkhanid Empire, centered in Iran, in the 1330s, this book considers how the integration of Anatolia into the Mongol world system transformed architecture and patronage in the region. Traditionally, this period has been studied within the larger narrative of a progression from Seljuk to Ottoman rule and architecture, in a historiography that privileges Turkish national identity. Once Anatolia is studied within the framework of the Mongol Empire, however, the region no longer appears as an isolated case; rather it is integrated into a broader context beyond the modern borders of Turkey, Iran, and the Caucasus republics. The monuments built during this period served a number of purposes: mosques were places of prayer and congregation, madrasas were used to teach Islamic law and theology, and caravanserais secured trade routes for merchants and travelers. This study analyzes architecture on multiple, overlapping levels, based on a detailed observation of the monuments. The layers of information extracted from the monuments themselves, from written sources in Arabic, Persian, and Turkish, and from historical photographs, shape an image of Islamic architecture in medieval Anatolia that reflects the complexities of this frontier region. New patrons emerged, craftsmen migrated between neighboring regions, and the use of locally available materials fostered the transformation of designs in ways that are closely tied to specific places. Starting from these sources, this book untangles the intertwined narratives of architecture, history, and religion to provide a broader understanding of frontier culture in the medieval Middle East, with its complex interaction of local, regional, and trans-regional identities.

Patricia Blessing is a staff member at the Stanford Humanities Center and Lecturer, Department of Art and Art History, Stanford University, USA.

"... this book is an eye-opening stroll through the monumental architecture of early Islamic Anatolia. Interweaving the historical and economic forces in play during the later 13th and early 14th centuries, through a study of archives, a rich scholarly literature and a personal knowledge of the land and its remains, Patricia Blessing examines the predominantly local architectural patronage under the Mongols in the main centres of Konya, Sivas, and Erzurum, and the smaller towns of Tokat, Amasya, and Ankara ... this attractive and clearly written book is far more than just an examination of architectural developments in Mongol Anatolia, but also a study in history that probes back into the Seljuk period and forwards into Ottoman times."

- Professor Paul Arthur (Universita del Salento, Italy) in the journal of the Society for Medieval Archaeology

"This book offers a new approach to the study of the architecture of Mongol-era Islamic architecture in Anatolia, highlighting the specific historical circumstances in which the tradition developed. It successfully charts the formation of local styles by comparing monuments within cities or by the same patron. Blessing’s use of historical documentation is thorough and rigorous; the bibliography is ample and up to date, and the images (with some color plates) are copious and mostly the author’s own."

Rebuilding Anatolia after the Mongol Conquest: Islamic Architecture in the Lands of Rum, 1240–1330