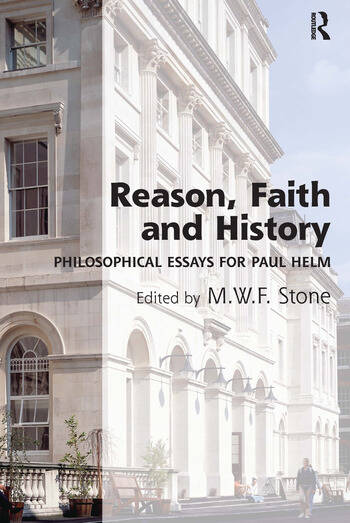 Spanning the breadth of philosophical, historical and theological interests articulated in the work of Paul Helm, including chapters on Calvinism, philosophical theology, philosophy of mind, Christian Doctrine and epistemology, Reason, Faith and History offers an accessible text for students of contemporary philosophy of religion as well as those interested in philosophical theology more broadly. Reason, Faith and History offers a unique collection of essays on key topics in the philosophy of religion. Published in honour of Paul Helm, a major force in contemporary English-speaking philosophy of religion, this book presents newly commissioned chapters by distinguished philosophers and theologians from North America, Israel, the UK and Continental Europe. Contributors include: Robertson, Trueman, Hughes, Swinburne, Torrance, Clark, Robinson, Pink, Gellman, Cross, Byrne, Hossack, and Crisp.

Martin Stone is a Professor of Renaissance & Early Modern Philosophy at the Katholieke Universiteit Leuven, Belgium.

’... this collection of essays presents much food for thought regarding the viability of the faith seeking understanding tradition and merits study.’ Religious Studies ’Paul Helm is one of the major voices in contemporary analytic philosophy of religion and philosophical theology. He is an avid proponent and careful expositor of Calvins' views, and has done more than just about anyone to defend and articulate, inter alia, 'soft' theological determinism, a strong view of divine sovereignty, divine timelessness, and the 'faith seeking understanding' tradition. Reason, Faith and History is a collection of essays that honours Helm's work by engaging it with the same sort of careful, exacting reasoning for which Helm himself is well known. ... These essays should be of interest to all philosophers of religion and philosophically-minded theologians, and jointly they are a great tribute to a man who has insisted on clarity and rigor throughout his thirty-five year career.’ Theological Book Review 'Overall I found this volume highly informative and intellectually stimulating. The contributors are all well known thinkers in the analytic tradition and their essays provide good introductions to their thought on these matters. ... I thoroughly recommend this book for anybody interested in the philosophy of religion in the analytic tradition.' Yearbook of the Irish Philosophical Society 'This is a varied and engaging collection of essays published in honour of Paul Helm, whose significant work in the philosophy of religion has covered a wide range of topics, including the nature of faith, the concept of God, and Calvinism. The contributors to this volume offer papers consistent with Helm's interests in reason, faith and history, and so diverse is the collection that it is hard to summarise neatly. ... Byrne's paper is an important one, both in its own right, and in the light that it throws on the very distinctive nature of Helm's philosophical theology.' Modern Beli