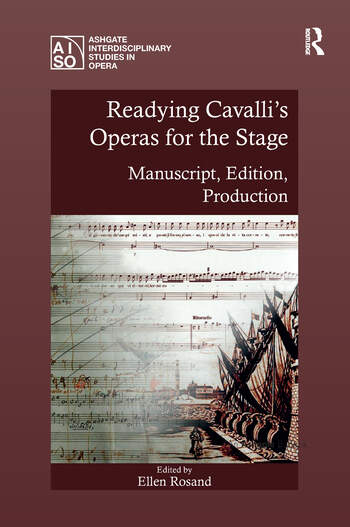 After more than three centuries of silence, the voice of Francesco Cavalli is being heard loud and clear on the operatic stages of the world. The coincidence of productions at La Scala (Milan) and Covent Garden (London) in the same month (September 2008) of two different operas signals a new stage in the recovery of these extraordinary works, confined until now to special venues committed to 'early music'-opera festivals, conservatory, and university productions. The works of the composer who is credited with having invented the genre of opera as we know it are finally enjoying a renaissance. A new edition of Cavalli's twenty-eight operas is in preparation, and the composer and his works are at the center of a great deal of new scholarship ranging from the study of sources and production issues to the cultural context of opera of this period.

In the face of such burgeoning interest, this collection of essays considers the Cavalli revival from various points of view. In particular, it explores the multiple issues involved in the transformation of an operatic manuscript into a performance. Although focused on the works of Cavalli, much of this material can transfer easily to other operatic repertoires.

Following an introductory part, reflecting back on four decades of Cavalli performances by some of the conductors responsible for the revival of interest in the composer, the collection is divided into four further parts: The Manuscript Scores, Giasone: Production and Interpretation, Making Librettos, and Cavalli Beyond Venice.

Ellen Rosand, George A. Saden Professor of Music at Yale University, is the author of Opera in Seventeenth-Century Venice: the Creation of a Genre (1991) and Monteverdi’s Last Operas: A Venetian Trilogy (2007). She is the general editor of the new Baerenreiter edition of the operas of Francesco Cavalli, a composer with whom she has been associated since her Ph.D. dissertation days.

‘Books as clear, inviting, well-structured and as necessary as this don’t come along often. It is a compendium of scholarly insights and practical guidance, and not to be missed’.

'The book is well produced, with clean music examples and photos of Cavalli's manuscripts … Readying Cavalli's Operas can be recommended overall to any opera enthusiast with a lively interest in how 17th-century Italian opera was composed, staged and transmitted … it furthers significantly our understanding of the most influential figure of 17th-century Italian opera'.

'… an impressive publication and a compelling advertisement for the healthy state of research on the subject. The quality and coherence of the collection reflect the standing and focus of the parent conference'.

'… a useful reference book. It should appeal to anyone interested in early opera … this is a detailed reference book, which can be read by both students and devotees of early opera. It offers a fascinating insight into the world of 17th-century opera and its evolutionary process of dramatic production, constantly changing, as it was moulded to the needs of the performers and the requirements of the theatre'.

'There is a cornucopia of interdisciplinarity here, combining music with linguistics, theatre, and English and Spanish literature, with the collection presenting both the fruit of long-term thinking by established Cavalli scholars but also interesting new approaches that expand the existing discourses. There is both theoretical pondering and practical suggestions, and together the essays provide a holistic approach. … the level of detailed interdisciplinarity afforded here is a welcome addition to our discipline'.

'This volume is dense. The scholarship throughout is thoughtful, robust, and deep.'