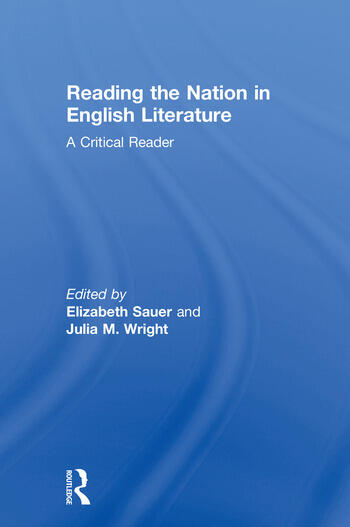 Reading the Nation in English Literature: A Critical Reader

This volume contains primary materials and introductory essays on the historical, critical and theoretical study of "national literature", focusing on the years 1550 – 1850 and the impact of ideas of nationhood from this period on contemporary literature and culture.

The book is helpfully divided into three comprehensive parts. Part One contains a selection of primary materials from various English-speaking nations, written between the early modern and the early Victorian eras. These include political essays, poetry, religious writing, and literary theory by major authors and thinkers ranging from Edmund Spenser, Anne Bradstreet and David Hume to Adam Kidd and Peter Du Ponceau. Parts Two and Three contain critical essays by leading scholars in the field: Part Two introduces and contextualizes the primary material and Part Three brings the discussion up-to-date by discussing its impact on contemporary issues such as canon-formation and globalization.

The volume is prefaced by an extensive introduction to and overview of recent studies in nationalism, the history and debates of nationalism through major literary periods and discussion of why the question of nationhood is important.

Reading the Nation in English is a comprehensive resource, offering coherent, accessible readings on the ideologies, discourses and practices of nationhood.

Reading the Nation in English Literature: A Critical Reader