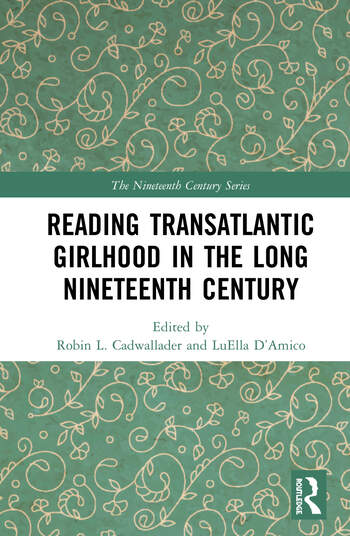 Available for pre-order. Item will ship after May 28, 2020
Add to Wish List
FREE Standard Shipping!

This collection is the first of its kind to interrogate both literal and metaphorical transatlantic exchanges of culture and ideas in nineteenth-century girls’ fiction. As such, it initiates conversations about how the motif of travel in literature taught nineteenth-century girl audiences to reexamine their own cultural biases by offering a fresh perspective on literature that is often studied primarily within a national context. Women and children in nineteenth-century America are often described as being tied to the home and the domestic sphere, but this collection challenges this categorization and shows that girls in particular were often expected to go abroad and to learn new cultural frames in order to enter the realm of adulthood; those who could not afford to go abroad literally could do so through the stories that traveled to them from other lands or the stories they read of others’ travels. Via transatlantic exchange, then, authors, readers, and the characters in the texts covered in this collection confront the idea of what constitutes the self. Books examined in this volume include Adelaide Trafton’s An American Girl Abroad (1872), Johanna Spyri’s Heidi (1881), and Elizabeth W. Champney’s eleven-book Vassar Girl Series (1883-92), among others.

A Swiss-American Merger: Reading Johanna Spyri’s Heidi Within and Beyond the Canon of Nineteenth-Century American Sentimental Fiction

"The delightful story was first in their minds": Dispelling Stereotypes While Indulging in Fictions in Elizabeth W. Champney’s Three Vassar Girls in England

"Is she a princess or only an American?": Transatlantic Travel and Identity Formation in Kate Douglas Wiggin’s Penelope Series

A World of Possibilities: Travel and Maturation in the Novels of Mary Jane Holmes

"everything, so indescribable, so never-to-be-forgotten": Reading Adeline Trafton’s An American Girl Abroad as a Cautionary Tale

Dreams of Youth: The Girl, the Writer, and the Nation in Catharine Maria Sedgwick’s Letters from Abroad

Section 3: Girlhood, Humane Offerings, and the Transatlantic Nature of Ideas

"Our humble words have gone over the seas": The Transatlantic Circulation of The Lowell Offering

A Transatlantic Queering of Kindness: Animality, Natural Childhood, and the Gendering of Humane Education

is a Professor of English and the Director of the Women’s Studies Program at Saint Francis University, Pennsylvania, where she teaches American literature, women’s literature, young adult literature, and theory.

is an Assistant Professor of English and Coordinator of the Women’s and Gender Studies Program at the University of the Incarnate Word in San Antonio, Texas.