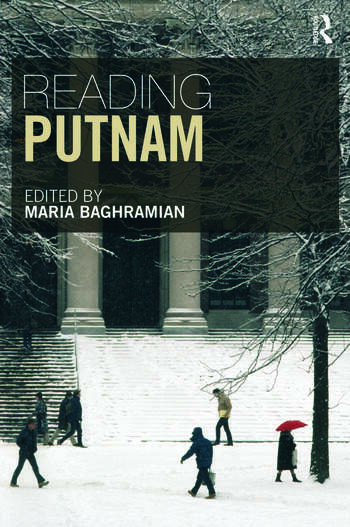 Hilary Putnam is one of the world’s leading philosophers. His highly original and often provocative ideas have set the agenda for a variety of debates in philosophy of science, philosophy of mind and philosophy of language. His now famous philosophical thought experiments, such as the ‘Twin earth’ and ‘the brains in the vat’ have become part of the established canon in philosophy and cognitive science.

Reading Putnam is an outstanding overview and assessment of Hilary Putnam’s work by a team of international contributors, and includes replies by Putnam himself. Divided into clear sections, it contains chapters on key aspects of Putnam’s large body of writing, including:

Offering an excellent survey of Putnam’s work, Reading Putnam is essential for those studying philosophy of mind, philosophy of language, and philosophy of science, as well as for anyone interested in contemporary philosophy.

Introduction: A life in Philosophy, Maria Baghramian  Prologue: From Quantum Mechanics to Ethics and Back Again, Hilary Putnam  Part 1: The Enigma of Realism  1. What of Pragmatism with the World Here?, Richard Boyd  2. Hilary and Me: Tracking down Putnam on the Realism Issue, Michael Devitt  3. Putnam and the Philosophical Appeal to Common Sense, David Macarthur  Part 2: On What There Is  5. Putnam vs. Quine on Revisability and the Analytic-Synthetic Distinction, Axel Mueller  6. Putnam on Existence and Ontology, Charles Parsons  7. Some Sources of Putnam’s Pluralism, Russell Goodman  8. Physics and Narrative, David Albert  9. Hilary Putnam’s Moral Philosophy, Ruth Anna Putnam  Part 3: Perception  10. Some Remarks on Externalism, Tyler Burge  11. Wittgenstein and Qualia, Ned Block  12. Affording us the World, Charles Travis  13. Concepts in Perceptual Experience: Putnam and Travis, John McDowell  Part 4: An Epilogue  14. On Nietzschean Perfectionism, Stanley Cavell.  Index

is Cogan University Professor Emeritus at Harvard University, USA. He is the author of eighteen books and numerous articles. His work has been instrumental in furthering research in philosophy of mind, philosophy of language, philosophy of science and mathematics.

Maria Baghramian is currently the Head of School of Philosophy at University College Dublin, Ireland and the editor of the International Journal of Philosophical Studies. She is a member of the Royal Irish Academy.

"Some of the papers in this varied collection interpret Putnam's claims or arguments, others present new work on a topic relating to Putnam's interests, and still others interpret and argue for positive views of their own. They are all interesting and clearly written, as are Putnam's responses. … The volume reminds us of the breadth, depth and creativity of Putnam's thinking, and the large number of very fundamental contributions that he has made." – Cory Juhl, Notre Dame Philosophical Reviews