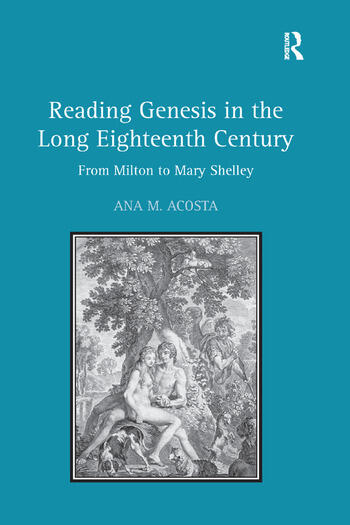 Reading Genesis in the Long Eighteenth Century: From Milton to Mary Shelley

In a reassessment of the long-accepted division between religion and enlightenment, Ana Acosta here traces a tissue of readings and adaptations of Genesis and Scriptural language from Milton through Rousseau to Wollstonecraft and Mary Shelley. Acosta's interdisciplinary approach places these writers in the broader context of eighteenth-century political theory, biblical criticism, religious studies and utopianism. Acosta's argument is twofold: she establishes the importance of Genesis within utopian thinking, in particular the influential models of Milton and Rousseau; and she demonstrates that the power of these models can be explained neither by traditional religious paradigms nor by those of religion or philosophy. In establishing the relationship between biblical criticism and republican utopias, Acosta makes a solid case that important utopian visions are better understood against the background of Genesis interpretation. This study opens a new perspective on theories of secularization, and as such will interest scholars of religious studies, intellectual history, and philosophy as well as of literary studies.

Contents: Introduction: West of Eden; Origin is the goal: Genesis in the 18th century; Dr. Milton's guide; or, the Utopia within; The passion of Jean-Jacques Rousseau; or, The Dystopia within; Wollstonecraft's body politics; or, philosophy in the bedroom; Frankenstein; or, L'Education des habitants d'une petite ville au pied des Alpes; Bibliography; Index.

Ana M. Acosta is Assistant Professor of English at Brooklyn College, CUNY, USA. She has published a number of articles on topics related to religion and enlightenment in the long eighteenth century and is currently at work on a book on the intersection between medical discourse and the religious epistemologies of Catholicism and Protestantism during the same period.

’Let me begin by commending Ashgate for publishing books that relate British literature to religious interests. In fact, parallel books listed on the back of Acosta's book virtually place it in a series of critical studies of religion and British literature of the last three centuries... The best part of this book is the synthesis of scholarship that emerges from the author's copious research. The result is encyclopedic work that presents an abundance of generalizing about the history of ideas...’ Christianity and Literature 'Rigorously argued and drawing on a rich and diverse range of source materials it illuminates a number of fields of interest to eighteenth-century scholars, and offers a genuine contribution to our understanding of the intellectual, spiritual, and literary history of the period.' Religion and the Arts 'This is a complex and thought-provoking book, and one that is a valuable addition to scholarship on the Enlightenment generally, and also on the eighteenth century, underlining as it does the need for flexible chronologies... an excellent text, and well worth reading for anyone interested not just in the eighteenth century but also in more recent developments in philosophical and theological, as well as literary, thought.’ Journal of Eighteenth-Century Studies

Reading Genesis in the Long Eighteenth Century: From Milton to Mary Shelley