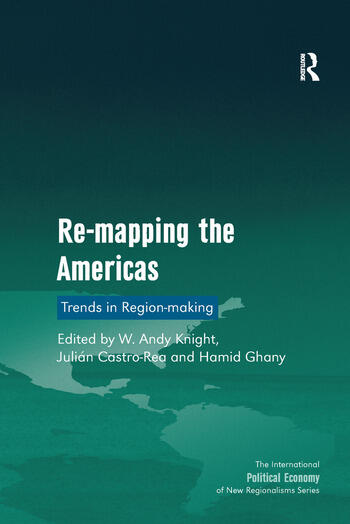 Re-mapping the Americas: Trends in Region-making

Since the end of the Second World War the map of the Americas has changed dramatically. Not only were many former European colonies turned into sovereign states, there was also an ongoing process of region-making recognizable throughout the hemisphere and obvious through the establishment of several regional agreements. The emergence of political and economic regional integration blocs is a very timely topic analyzed by scholars in many disciplines worldwide. This book looks at remapping the recent trends in region-making throughout the Americas in a way that hasn’t been at the center of academic analyses so far. While examining these regionalisation tendencies with a historical background in mind, the authors also answer fundamental questions such as: What influences does globalization have on region-making, both on normative regionalism plans as well as on actual economic, political, cultural, military and social regionalization processes driven by state and non-state actors? What ideas or interests lead states in the Americas to cooperate or compete with one another and how is this power distributed? How do these regional agreements affect trade relations and have there been trade barriers set up to protect national economies? What agreements exist or have existed and how did they change with regard to contents and for what reason? The book informs academic as well as non-academic audiences about regional developments in the Americas, in particular those dating back to the last twenty years. Beyond the primary purpose of summarizing the hemisphere’s recent trends, the book also brings clarification in a detailed but easy to understand way about timely issues regarding the institutionalisation, or lack thereof, of the plethora of regional and sub-regional bodies that have emerged in this hemisphere over the past couple of decades.

W. Andy Knight is Director of the Institute of International Relations (IIR) at The University of the West Indies and Professor and former Chair of the Department of Political Science at the University of Alberta. He served as Governor of the International Development Research Centre (IDRC) from 2007 to 2012, co-edited Global Governance journal from 2000 to 2005 and was Vice Chair of the Academic Council on the United Nations System (ACUNS). Knight has written and edited several books, book chapters and journal articles on various aspects of multilateralism, global governance and peace, and United Nations reform. His recent books include: The Routledge Handbook of the Responsibility to Protect (with Frazer Egerton) -Routledge 2012; Towards the Dignity of Difference?: Neither 'end of History' Nor 'clash of Civilizations' (with Mojtaba Mahdavi) - Ashgate 2012; and Global Politics (with Tom Keating) - Oxford University Press 2010. Professor Knight is a Fellow of the Royal Society of Canada. JuliÃ¡n Castro-Rea (PhD, Université de Montréal) is Associate Professor of Political Science, University of Alberta. His main area of research interest is North American politics (Canada, Mexico, and the United States), both from comparative and trilateral perspectives and he has written extensively on this topic in the three official languages of North America. Among his most recent publications are: Our North America: Social and Political Issues beyond NAFTA (Ashgate, 2012); Le gÃ¢chis qu’ils ont fait : comment la droite a ruiné les politiques publiques en Amérique du Nord Â» in Bulletin d’histoire politique, vol. 21, no. 1, fall 2012, pp. 139-149; and Common Sense or Collusion? Business Interests behind North American Deep Integration, in Fox, Michael and Andrew Nurse, eds., Dynamics and Trajectories: Canada and North America (Fernwood, 2012), pp. 144-160. Hamid Ghany is former Dean of the Faculty of Social Sciences at The University of the West Indies, St. Au

’This re-mapping of the regional politics of the Americas has been deftly undertaken by an able team of scholars working in the Americas. The outcome is a considered, and up-to-date, assessment of contemporary trends in the international politics of this changing region. The late Henry Gill, to whose memory the book is dedicated, would have read it with interest and delight.’ Anthony Payne, University of Sheffield, UK ’A veritable tour de force of key trends that are reshaping a continent, and of how the new regionalism in the Americas is holding up. A must-read for those who want to understand the complex interaction between the Western Hemisphere and global order.’ Jorge Heine, Wilfrid Laurier University, Canada

Re-mapping the Americas: Trends in Region-making