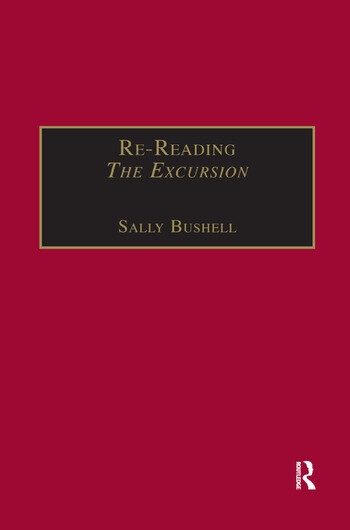 Re-Reading The Excursion: Narrative, Response and the Wordsworthian Dramatic Voice

Re-Reading The Excursion: Narrative, Response and the Wordsworthian Dramatic Voice is a groundbreaking study, which transforms contemporary critical understanding of The Excursion and of the place of this long poem in the Wordsworthian canon. Sally Bushell argues that the poem, which has suffered at the hands of critics for most of the twentieth century, has been unfairly judged according to a Coleridgean rather than a Wordsworthian definition of "philosophy"-that it has been read as a didactic work, rather than one which uses its dramatic form to teach its readers to think for themselves. She offers a new reading in which The Excursion is shown to be about providing the readers with moral habits and mental constructs by which to learn, not simply telling them what to think. The book begins with a discussion of the reception of the poem in 1814, considering the responses of Coleridge, Hazlitt, Francis Jeffrey and Charles Lamb. This historicized discussion is then balanced by a reading of the poem at the compositional stage, looking at the emergence from the manuscripts of a Wordsworthian dramatic voice. The author goes on to argue that the poem's philosophy is performative-that is, concerned with the way in which moral ideas can best be communicated, as much as with the ideas themselves. She then shifts her attention to consider how this operates in relation to the reader, considering the importance of context in relation to emotional response. Later, the epitaphic books are reconsidered in the light of Wordworth's critical writing; Bushell argues that the significance of the epitaph for him lies in its values as a poetic form in which the text itself is released from poetic authority. Finally, the author looks back at The Prelude from the perspective of The Excursion and shows how the later poem attempts to value the ordinary, rather than the poetic, mind. The conclusion reached is that Wordsworth is not just the "egotistical" poet of The Prelude, interested largely in the development of his own imaginative powers, but one who goes on to explore the limits of subjectivity and the importance of different kinds of imaginative links between individuals.

Contents: Introduction; The poet's voice: Disappointed expectations; Ventiloquizing through another man's mouth: Coleridge; Impertinent babbling: Hazlitt and Jeffrey; The voice of speaking communication: Lamb; Dramatic composition, dramatic definition: Defining the dramatic poem; Internalised dramatic conventions; Indirectness; In which they differ: characterisation; In which they resemble each other: textual transposition; Dramatic composition; A performative philosophy: Context or content: i. ideology; Context or content: ii. Religion; Performative structures: i. Dialogue; Performative structures: ii. Walking and talking; A context for response: The historical context: reading aloud; Contextualising affective response; The poetic context: i. The embedded narrative; The poetic context: ii. Retelling Margaret's tale; Making the reader active: Doubling response: Margaret and the sentimental; Unsettling the reader; The twice-told tale; The problem of the poet; Different ways of seeing: Seen through a tender haze: the epitaph form; We see, then, as we feel: subjective difference; Meeting at the midway point: subjective transcendence; Narrative Memory: The minds of men; Telling tales in The Prelude; Narrative memory in The Excursion; Narrative memory and the poetic act; The poet and his community; Bibliography; Index.

Sally Bushell completed her Ph.D. at Queens' College, Cambridge in 1999. She is now lecturer in Romantic Studies and Co-Director of The Wordsworth Centre at Lancaster University. She is also currently co-editing the Cornell edition of The Excursion (forthcoming). This is her first full length critical work.

'Well written, well presented, and very scholarly ... The use of critical theory is admirable - sophisticated, illuminating, but not overdone ... the section arguing from the manuscripts is scholarly and original. ... an intelligent and stimulating study of a major poem.' Professor J.R. Watson, University of Durham 'An important and original contribution to Wordsworth studies and, in particular, to the project of recovering The Excursion as a central text in the poet's corpus. ... Sally Bushell helps us to understand The Excursion as the indisputably (if idiosyncratically) "dramatic" work the poet intended to write. ... Bushell ... opens up the poem's "philosophy" to fresh scrutiny and appreciation. This admirable study establishes The Excursion as a poem worth reading - and re-reading.' Alison Hickey, Associate Professor of English, Wellesley College, and author of Impure Conceits: Rhetoric and Ideology in Wordsworth's ’Excursion' '... in this fine study, Bushell encourages us that there is more to The Excursion than we first realized.' The Byron Journal '... Wordsworthians [...] will greatly value Bushell's contributions to the discussion of the The Excursion and the strong scholarship she brings to her readings.' European Romantic Review '... richly insightful of the various published and manuscript versions of this too neglected Wordsworthian text... both the critic and the poet have succeeded brilliantly in their task of reading poetry back into real life...' Australasian Victorian Studies Journal

Re-Reading The Excursion: Narrative, Response and the Wordsworthian Dramatic Voice