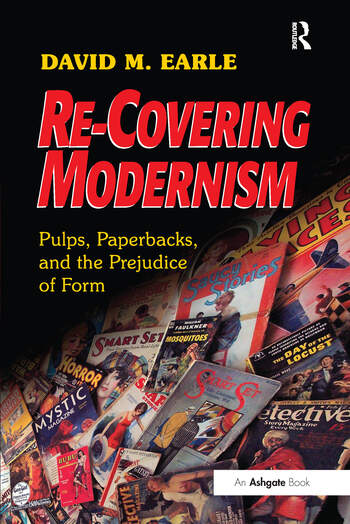 Re-Covering Modernism: Pulps, Paperbacks, and the Prejudice of Form

In the first half of the twentieth century, modernist works appeared not only in obscure little magazines and books published by tiny exclusive presses but also in literary reprint magazines of the 1920s, tawdry pulp magazines of the 1930s, and lurid paperbacks of the 1940s. In his nuanced exploration of the publishing and marketing of modernist works, David M. Earle questions how and why modernist literature came to be viewed as the exclusive purview of a cultural elite given its availability in such popular forums. As he examines sensational and popular manifestations of modernism, as well as their reception by critics and readers, Earle provides a methodology for reconciling formerly separate or contradictory materialist, cultural, visual, and modernist approaches to avant-garde literature. Central to Earle's innovative approach is his consideration of the physical aspects of the books and magazines - covers, dust wrappers, illustrations, cost - which become texts in their own right. Richly illustrated and accessibly written, Earle's study shows that modernism emerged in a publishing ecosystem that was both richer and more complex than has been previously documented.

David M. Earle is Associate Professor of English at the University of West Florida, USA.

'Earle has a voice, an argument, and a breadth of knowledge that combine to make Re-covering Modernism unavoidable, a stele in the road, to be reckoned with.' Sharp News '... [Earle's work] suggests exciting new directions and critical contexts for research in modernist studies.' Year's Work in Critical and Cultural Theory

Re-Covering Modernism: Pulps, Paperbacks, and the Prejudice of Form