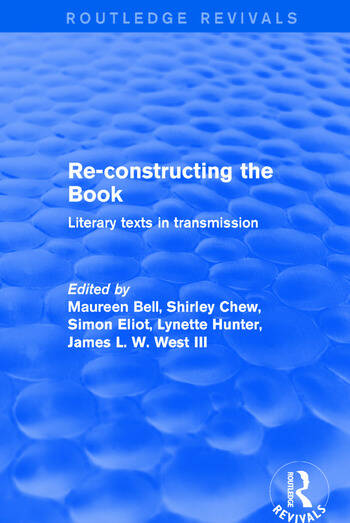 This title was first published in 2001. Literary critics, textual editors and bibliographers, and historians of publishing have hitherto tended to publish their research as if in separate fields of enquiry. The purpose of this volume is to bring together contributions from these fields in a dialogue rooted in the transmission of texts. Arranged chronologically, so as to allow the use of individual sections relevant to period literature courses, the book offers students and teachers a set of essays designed to reflect these approaches and to signal their potential for fruitful integration. Some of the essays answer the demand "Show me what literary critics (or textual editor; or book historians) do and how they do it", and stand as examples of the different concerns, methodologies and strategies employed. Others draw attention to the potential of the approaches in combination.

’This state-of-the-art collection will interest all students of book history, material textuality and the sociology of the text. Ranging from Shakespeare to cyberspace, these essays by such leading scholars as James West, Hermione Lee, the late D. F. McKenzie and Christopher Ricks open fascinating perspectives on literary construction from the Renaissance to the present.’ George Bornstein, C.A. Patrides Professor of Literature, University of Michigan ’Experts in the field will welcome unreservedly this fine collection of essays by a distinguished group of scholars containing as it does studies of texts ranging from the seventeenth century to the present day and topics ranging from censorship to editorial practice ... the chronological and methodological span of the volume and the thoughtful provision of separate bibliographies for each essay, make this not only a superbly inspiring, but also an immensely convenient tool for the introduction of students to the burgeoning field of book history in its many guises.’ Elisabeth Leedham-Green, Cambridge University Library ’This collection of original, wide-ranging essays by eighteen leading scholars of the History of the Book journeys through nearly five hundred years of historic bookmaking, from the poetry of Shakespeare and Marvell to the fiction of Elizabeth Bowen and Amitav Ghosh. Under the contributors' lively scrutiny, a volume turns into an archaeological terrain, packed with silenced traces of its materialisation, of its coming-into-being; deciphering hints and clues, erasures and errors, the writers reveal how the vitality of texts, however familiar, can be refreshed by inspired thinking from a new perspective. Re-constructing the Book is an exciting display of learning and bibliophilia; in the very midst of the cyber-revolution, the contributors dazzlingly represent the continuing, satisfying and complex interconnectedness of a living, reading community today.’ Marina Warner, author of From the Be