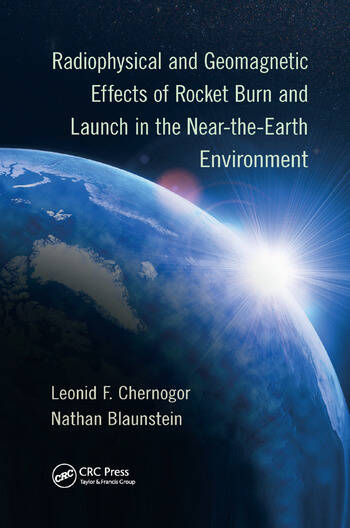 Radiophysical and Geomagnetic Effects of Rocket Burn and Launch in the Near-the-Earth Environment describes experimental and theoretical studies on the effects of rocket burns and launchings on the near-the-Earth environment and geomagnetic fields. It illuminates the main geophysical and radiophysical effects on the ionosphere and magnetosphere surrounding the Earth that accompany rocket or cosmic apparatus burns and launchings from 1,000 to 10,000 kilometers.

The book analyzes the disturbances of plasma and the ambient magnetic and electric fields in the near-Earth environment from rocket burns and launchings from Russia, Kazakhstan, the United States, China, France, and other global space centers. Describing the radiophysical effects of rocket burn and launching in the middle and upper ionosphere, it focuses on the ecological consequences of space exploration—detailing methods for eliminating the harmful effects of space exploration.

Measurements for the studies presented in the book were carried out using numerous radiophysical methods and techniques, including HF Doppler radar, incoherent and coherent scatter radar systems, microwave radar, magnetometer, and optical instrumentation and spectroscopy.

The book analyzes the effects of rocket burns and launchings from 1975 to 2010 in worldwide launch campaigns. This book is an ideal reference for scientists in geophysics and radiophysics, specialists in rocket launching, and ecologists. It is also suitable as a fundamental handbook for graduate and postgraduate students taking physics and cosmic sciences courses at the university level.

Nathan Blaunstein was born in Moldova, former USSR, in 1948. He received MS degrees in radio physics and electronics from Tomsk University, Tomsk, former Soviet Union, in 1972, and PhD and DS and professor degrees in radio physics and electronics from the Institute of Geomagnetism, Ionosphere, and Radiowave Propagation (IZMIR), Academy of Science USSR, Moscow, Russia, in 1985 and 1991, respectively. From 1979 to 1984, he was an engineer and a lecturer, and then, from 1984 to 1992, a senior scientist, an associate professor, and a professor at Moldavian University, Beltsy, Moldova. From 1993 he was a researcher of the Department of Electrical and Computer Engineering and a visiting professor in the Wireless Cellular Communication Program at the Ben-Gurion University of the Negev, Beer-Sheva, Israel. Since April 2001, he has been an associate professor, and in 2005, a full professor in the Department of Communication Systems Engineering. Dr. Blaunstein has published ten books, two special chapters in handbooks on applied engineering and applied electrodynamics, six manuals, and over 190 articles in radio and optical physics, communication, and geophysics. His research interests include problems of radio and optical wave propagation, diffraction, reflection, and scattering in various media (sub-soil medium, terrestrial environments, troposphere, and ionosphere) for purposes of optical communication and radio and optical location, aircraft, mobile-satellite, and terrestrial wireless communications and networking.