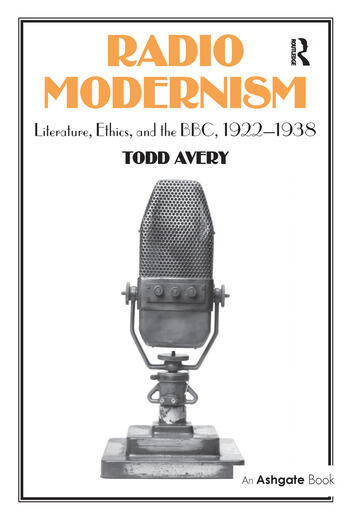 Radio Modernism marries the fields of radio studies and modernist cultural historiography to the recent 'ethical turn' in literary and cultural studies to examine how representative British writers negotiated the moral imperative for public service broadcasting that was crafted, embraced, and implemented by the BBC's founders and early administrators. Weaving together the institutional history of the BBC and developments in ethical philosophy as mediated and forged by writers such as T. S. Eliot, H. G. Wells, E. M. Forster, and Virginia Woolf, Todd Avery shows how these and other prominent authors' involvement with radio helped to shape the ethical contours of literary modernism. In so doing, Avery demonstrates the central role radio played in the early dissemination of modernist art and literature, and also challenges the conventional assertion that modernists were generally elitist and anti-democratic. Intended for readers interested in the fields of media and cultural studies and modernist historiography, this book is remarkable in recapturing for a twenty-first-century audience the interest, fascination, excitement, and often consternation that British radio induced in its literary listeners following its inception in 1922.

Contents: Introduction: Modernism in the air; Arnold over Britain? John Reith and broadcasting morality; Common talkers: the Bloomsbury group and the aestheticist ethics of broadcasting; A natural selection: H.G. Wells and a Huxleyan ethics of communications; Talks toward a definition of morality: T.S. Eliot and the consecration of broadcasting; Conclusion; Works cited; Index.

Professor Todd Avery is Assistant Professor of English at the University of Massachusetts Lowell, USA.

'Radio Modernism forges new pathways for understanding radio as productive of imagined communities both in and beyond the nation. Pitting the BBC’s foundational policies as a national institution against the diverse voices of numerous modernist broadcasters, Todd Avery provocatively argues that radio’s potential for shaping the public sphere found early expression in conflicting models of culture and community that were fundamentally reflective of differing ethical systems. Bringing together modernism and mass communication, print culture and radio culture, media history and cultural theory, this elegantly written and broadly knowledgeable book will interest a wide range of scholars and general readers alike.' Melba Cuddy-Keane, Professor of English, University of Toronto '...a worthwhile [read], especially for those interested in the genesis of British broadcasting (and how it differed from American) and how British radio affected literary modernism... Recommended.' Choice '... compact but meticulously sourced and argued volume... The arguments and archives at the author's disposal are varied and well searched... Radio modernism's great strategic achievement, and the key to its unusual readability, is this identification of compelling relay stations [...] that send its signal bounding between the familiar surfaces of literary history and technoculturalism, locating a wealth of material to which readers of modernism may well wish - and need - to become attuned.' Woolf Studies Annual ’... stimulating new book... to add a valuable layer to our increasingly complex and nuanced picture of relations between modernity and mass culture.’ Modernism/Modernity