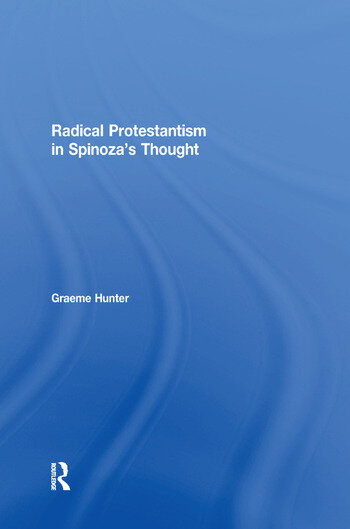 Spinoza is praised as a father of atheism, a precursor of the Enlightenment, an 'anti-theologian' and a father of political liberalism.Â  When the religious dimension of Spinoza's thought cannot be ignored, it is usually dismissed as some form of mysticism or pantheism. This book explores the positive references to Christianity presented throughout Spinoza's works, focusing particularly on the Tractatus Theologico-politicus.Â  Arguing that advocates of the anti-Christian or un-Christian Spinoza fail to look beyond Spinoza's ethics, which has the least to say about Christianity, Graeme Hunter offers a fresh interpretation of Spinoza's most important works and his philosophical and religious thought.Â Â While there isÂ no evidence that SpinozaÂ became a Christian in any formal sense,Â Hunter argues thatÂ his aim was neither to be heretical nor atheistic, but rather to effect a radical reform of Christianity and a return to simple Biblical practices.Â This book presents a unique contribution to current debate for students and specialist scholars in philosophy of religion, the history of philosophy and early modern history.

'Graeme Hunter [...] presents a stimulating, albeit controversial, alternative understanding of Spinoza. Hunter's book is engaging and his proposals and the scope of his study remarkably bold. His assertions challenge what is commonplace in current discussion... Hunter's work deserves serious consideration in future research on Spinoza's philosophy and the Tractatus Theologico-Politicus.' Ars Disputandi 'Hunter's book is bold, well-written, clear and a pleasure to read. It is important that such a radical thesis be brought into the daylight...' Journal of the History of Philosophy ’Hunter's book will provide much material for discussion on Spinoza's religious affinities and their consequences on his philosophy. His novel yet straightforward reading of Spinoza answers many puzzling questions, and it should help future readers of Spinoza better understand some of the consequences and issues at stake when comparing the Ethics with the TTP.’ The Conral Grebel Review ’Although this work is directed primarily at Spinoza scholars, Hunter intends all but Chapter Seven to be accessible to undergraduates... Very well written, philosophically rich, and vigorously argued, this book merits attention from both of its intended audiences.’ The Review of Metaphysics