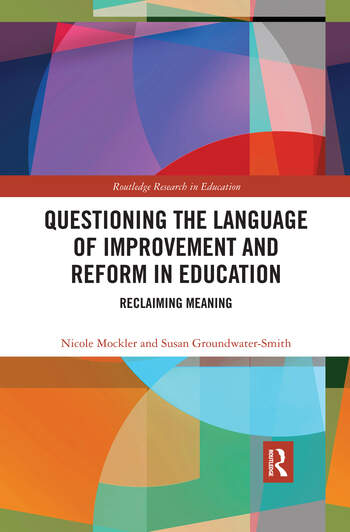 Questioning the Language of Improvement and Reform in Education: Reclaiming Meaning

Questioning the Language of Improvement and Reform in Education challenges the language used in education by linking the language of both the public and professional domains with the changing intentions of the governance of education. Exploring various issues, which embody the many manifestations of the manner in which strident, conservative language has captured the public view of education, the book covers topics such as the importance of language in the context of educational practice, the media's portrayal of teachers globally, the role of students in the face of curriculum reform and the language used in educational policy worldwide.

The book addresses the ways in which the words ‘improvement’ and ‘reform’ have been appropriated and hollowed-out by policymakers in order to justify globalised education policies. Using international case studies and reports, the authors argue that the employment of specific words masks the reality that new educational policies are regressive and require re-examination, while perpetuating the illusion that progressive educational practice is being brought to the fore.

Questioning the Language of Improvement and Reform in Education

is a fascinating and original take on this topic, which will be of great interest to educational practitioners, policymakers and linguists.

Chapter 3. The Seduction of Effectiveness

Chapter 5. The Language of Reform and Teachers’ Work

Chapter 6. The work of learners in the face of curriculum reform

Chapter 8. The ‘Mediation’ of Educational Reform and Improvement

is Honorary Professor of Education at the University of Sydney, Australia, and Chair of the Teacher Education Advisory Board.

Questioning the Language of Improvement and Reform in Education: Reclaiming Meaning