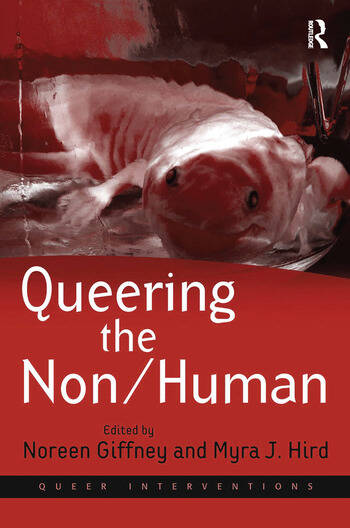 What might it mean to queer the Human? By extension, how is the Human employed within queer theory? These questions invite a reconsideration of the way we think about queer theory, the category of the Human and the act of queering itself. This interdisciplinary volume of essays gathers together essays by international pioneering scholars in queer theory, critical theory, cultural studies and science studies who have written on topics as diverse as Christ, the Antichrist, dogs, starfish, werewolves, vampires, murderous dolls, cartoons, corpses, bacteria, nanoengineering, biomesis, the incest taboo, the death drive and the 'queer' in queer theory. Contributors include Robert Azzarello, Karen Barad, Phillip A. Bernhardt-House, Jeffrey Jerome Cohen, Claire Colebrook, Noreen Giffney, Judith Halberstam, Donna J. Haraway, Eva Hayward, Myra J. Hird, Karalyn Kendall, Vicki Kirby, Alice Kuzniar, Patricia MacCormack, Robert Mills, Luciana Parisi and Erin Runions.

'Breathtaking in its interdisciplinarity and breadth, Queering the Non/Human is essential reading for anyone interested in literary and cultural studies, queer theory, science studies, gender and sexuality...in short for anyone who is a serious thinker. I admire this volume not just for its insight but for its sheer panache: the essays are at once serious arguments and great fun to read.' Jeffrey J. Cohen, George Washington University, USA 'Finally, a collection that truly captures the spirit of critique and the process of wonder that queer theory promises yet too often fails to deliver. Queering the Non/Human is an indispensable interdisciplinary text for anyone and everyone who has ever contemplated (or even presumed) what it means to be human.' Nikki Sullivan, Macquarie University, Australia '... the essays in this volume are highly recommended for forcing the reader in various ways to unpack the binaries that structure liberalism and to rethink core concepts such as bodily integrity, agency, knowing, and ’the human’ itself... this is the ideal book for exploring and coming to terms with what contributor Judith Halberstam has elsewhere called ’’a queer time’’ (2005).' Feminist Legal Studies ’... not only exhilarating to read, but carves significant inroads into age-old debates about biological determinism and social constructivism... I am impressed by this book and its methodological and theoretical coherency. Far too many times, I have been sadly disappointed by edited books that don’t quite live up to the aims described by its editors. Finally, this book is the exception. And it is a book that I will surely return to... I look forward to re-reading this book, or maybe I should send it to a serial hater of cultural studies with the observation that, ’This has all happened before and it will happen again.’ M/C Reviews - Culture and the Media 'This volume marks a significant contribution to the field of queer theory as well as other discou