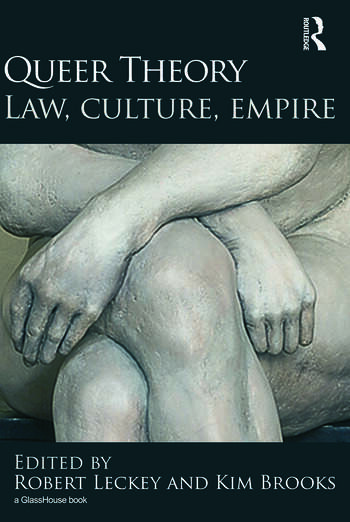 Queer Theory: Law, Culture, Empire uses queer theory to examine the complex interactions of law, culture, and empire. Building on recent work on empire, and taking contextual, socio-legal, comparative, and interdisciplinary approaches, it studies how activists and scholars engaged in queer theory projects can unwittingly advance imperial projects and how queer theory can itself show imperial ambitions. The authors – from five continents – delve into examples drawn from Bollywood cinema to California’s 2008 marriage referendum. The chapters view a wide range of texts – from cultural productions to laws and judgments – as regulatory forces requiring scrutiny from outside Western, heterosexual privilege. This innovative collection goes beyond earlier queer legal work, engaging with recent developments, featuring case studies from India, South Africa, the US, Australasia, Eastern Europe, and embracing the frames offered by different disciplinary lenses.

Queer Theory: Law, Culture, Empire will be of particular interest to students and researchers in the fields of socio-legal studies, comparative law, law and gender/sexuality, and law and culture.

Robert Leckey is Assistant Professor in the Faculty of Law at McGill University, where he teaches and researches in constitutional law, family law, and comparative law. He is the author of Contextual Subjects: Family, State, and Relational Theory (2008).

Kim Brooks is Associate Professor and the H. Heward Stikeman Chair in the Law of Taxation in the Faculty of Law at McGill University. She is the editor of Justice Bertha Wilson: One Woman's Difference (2009).