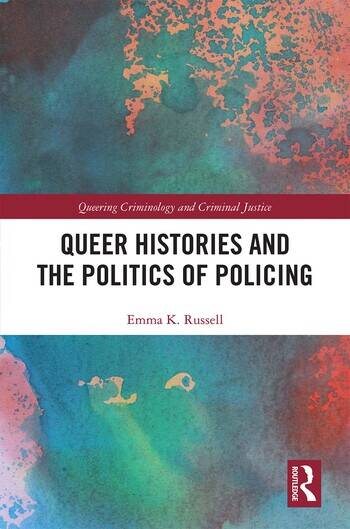 Queer Histories and the Politics of Policing

Despite ongoing challenges to the criminalisation and surveillance of queer lives, police leaders are now promoted as allies and defenders of LGBT rights. However, in this book, Emma K. Russell argues that the surface inclusion of select LGBT identities in the protective aspirations of the law is deeply tenuous and conditional, and that police recognition is both premised upon and reproductive of an imaginary of' 'good queer citizens'—those who are respectable, responsible, and 'just like' their heterosexual counterparts.

Based on original empirical research, Russell presents a detailed analysis of the political complexities, compromises, and investments that underpin LGBT efforts to achieve sexual rights and protections. With a historical trajectory that spans the so-called 'decriminalisation' era to the present day, she shows how LGBT activists have both resisted and embraced police incursions into queer space, and how—with LGBT support—police leaders have re-crafted histories of violence as stories of institutional progress.

Queer Histories and the Politics of Policing advances broader understandings of the nature of police power and the shifting terrain of sexual citizenship. It will be of interest to students and researchers of criminology, sociology, and law engaged in studies of policing, social justice, and gender and sexuality.

1 Introduction: queer histories and the politics of policing

2 Policing the colony: the uneven histories of queer criminalisation

3 Over-policing and the production of good queer victims: the Tasty nightclub raid

4 ‘We don’t just want a piece of the pie; we want a whole new pie’: gay pride, pink dollars, and queer anti-capitalism

6 Arresting ‘hate’: queer penalities and the take-up of a crime paradigm

7 The fabrication of queer history: narrating the police apology

Emma K. Russell is Lecturer in Crime, Justice and Legal Studies at La Trobe University, Australia. She researches in the fields of queer criminology and critical carceral studies. She is the co-author of Resisting Carceral Violence: Women’s Imprisonment and the Politics of Abolition (2018).

Queer Histories and the Politics of Policing