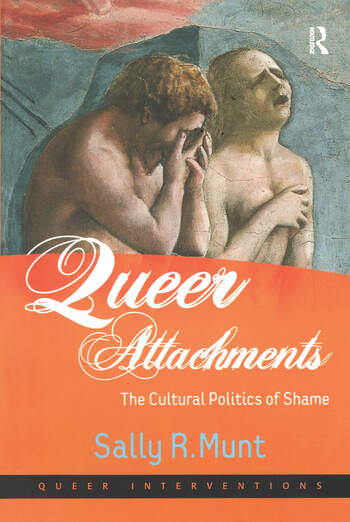 Why is shame so central to our identity and to our culture? What is its role in stigmatizing subcultures such as the Irish, the queer or the underclass? Can shame be understood as a productive force? In this lucid and passionately argued book, Sally R. Munt explores the vicissitudes of shame across a range of texts, cultural milieux, historical locations and geographical spaces - from eighteenth-century Irish politics to Philip Pullman's His Dark Materials trilogy, from contemporary US academia to the aesthetics of Tracey Emin. She finds that the dynamics of shame are consistent across cultures and historical periods, and that patterns of shame are disturbingly long-lived. But she also reveals shame as an affective emotion, engendering attachments between bodies and between subjects - queer attachments. Above all, she celebrates the extraordinary human ability to turn shame into joy: the party after the fall. Queer Attachments is an interdisciplinary synthesis of cultural politics, emotions theory and narrative that challenges us to think about the queerly creative proclivities of shame.

Contents: Series editors' preface: After shame; Foreword, Donald L. Nathanson; The cultural politics of shame: an introduction; Queer Irish sodomites: the shameful histories of Edmund Burke, William Smith, Theodosius Reed, the Earl of Castlehaven and diverse servants - among others; Shove the queer: Irish/American shame in New York's annual St Patrick's Day parades; Expulsion: the queer turn of shame; Queering the pitch: contagious acts of shame in organisations; Shameless in Queer Street; A queer undertaking: uncanny attachments in the HBO television drama series Six Feet Under; After the fall: queer heterotopias in Philip Pullman's His Dark Materials trilogy; A queer feeling when I look at you: Tracey Emin's aesthetics of the self; Bibliography; Index.

Sally R. Munt is Professor of Media and Cultural Studies at the University of Sussex , UK. She has published extensively in cultural studies and is the author or editor of seven previous books including Heroic Desire: Lesbian Identity and Cultural Space (1998) and (as editor) Cultural Studies and the Working Class: Subject to Change (2000). She has given numerous keynote speeches and invited lectures in Europe and the US.

'Queer Attachments affords all the benefit of Sally Munt’s mobile mind and lucid, eloquent writing. But the best thing is how finely she gets into the very guts of the experience of shame - and making space there to move around and explore, reveals immense complexity as well as a profound source of motivation.' Eve Kosofsky Sedgwick, City University of New York, USA 'Edgy and provocative, Queer Attachments tackles the contagious dynamics of gay shame, exploring not only its power to abject and deform, but to produce unpredicted, self-affirming forms of sociality. Passionately argued and sweeping in scope, its analysis of the way shame informs and links queer, Irish and working class identities shows what’s at stake in moving beyond gay pride.' Valerie Traub, University of Michigan,USA 'This book deserves to be read, but also contested, by a wider audience than just those who delight in queer studies. It is a dazzling, provocative and highly enjoyable read for all those interested in matters shameful, queer, emotional and cultural.' Ken Plummer, Times Higher Education Supplement 'Pulling as much from Michel Foucault as from queer theory, the author imbues this intelligent analysis with an unusually genuine, personal quality...Munt's language is visual, visceral, and vivid, with a whimsical abundance of mixed metaphors...the book is a valuable contribution to the field. A must read for scholars of British cultural studies...Highly recommended.' Choice