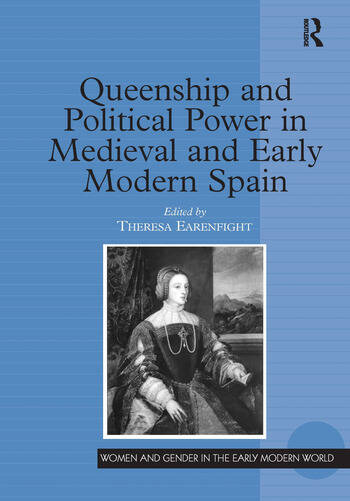 Queenship and Political Power in Medieval and Early Modern Spain

Unlike empresses in Germany and queens in England and France, the lives and political careers of most Iberian queens remain largely unknown to non-specialists. In this collection, Theresa Earenfight brings together new research on medieval and early modern Spanish queens that highlights the distinctive political culture that resulted in forms of queenship similar to, yet also substantially different from, that of northern Europe. The essays consider three aspects of queenship and politics: the institutional foundations and practice of politics, the politics of religion and religious devotion, and the literary and artistic representations of queenship and power. Late medieval queens, because they often occupied prominent and powerful offices such as the regency in Castile and Portugal and the Lieutenancy in the Crown of Aragon, exemplify a unique form of queenship that can best be described as a political partnership. Habsburg queens and empresses, often excluded from such official political roles, were less publicly visible but their power as partner to the king, although shrouded, remains potent. Their political careers were the result of two forces: first, military circumstances brought about by territorial expansion, conquest, and second, a political culture that did not explicitly prohibit queens from active participation in the governance of the realm. The essays in this collection-by both newer and well established scholars-demonstrate the range and depth of current research on Iberian queenship, and prompt a re-examination of long-held assumptions about women and the exercise of power in pre-modern Spain.

Contents: Preface: Part I The Practical Limits of Partnership: Unwilling partners: conflict and ambition in the marriage of Peter II of Aragon and Marie de Montpellier, Elizabeth Haluska-Rausch; The many roles of the medieval queen: some examples from Castile, Joseph F. O'Callaghan; Absent kings: queens as political partners in the medieval crown of Aragon, Theresa Earenfight. Part II Practising the Politics of Religion: Defending their Jewish subjects: Elionor of Sicily, Maria de Luna, and the Jews of Morvedre, Mark Meyerson; Spirit and force: politics, public and private in the reign of Maria de Luna (1396-1406), NÃºria Silleras-FernÃ¡ndez; The queen and the master: Catalina of Lancaster and the military orders, Ana Echevarria-Arsuaga. Part III Representing the Politics of Queenship: Royal portraits: representations of queenship in the 13th-century Catalan chronicles, Marta VanLandingham; Isabel of Castile (1451-1504), her self-representation and its context, Peggy Liss; Choices and consequences: the construction of Isabel de Portugal's image, Jorge SebastiÃ¡n Lozano; Conspicuous in her absence: Mariana of Austria, Juan José of Austria, and the representation of her power, Eleanor Goodman. Bibliography; Index.

Theresa Earenfight is Associate Professor of History at Seattle University.

Winner of the Society for the Study of Early Modern Women award for a collaborative project published in 2005. '... presents a refreshingly new view of female monarchs in Iberian history that shows the wide variety of ways in which they exercised authority. In contrast to queens in the northern realms of Europe, Spanish royal women took more active roles in governance. The essays in this collection provide a critical analysis of the power and status of non-royal and royal women, alike, as well as the development political cultures and mechanisms that governed pre-modern European monarchy.' Mary Elizabeth Perry, Professor of History, Occidental College and Research Associate, UCLA Center for Medieval and Renaissance Studies

Queenship and Political Power in Medieval and Early Modern Spain