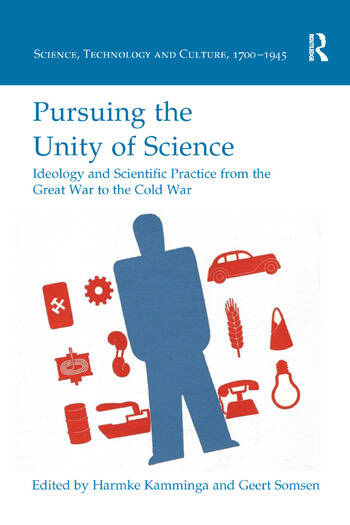 Pursuing the Unity of Science: Ideology and Scientific Practice from the Great War to the Cold War

From 1918 to the late 1940s, a host of influential scientists and intellectuals in Europe and North America were engaged in a number of far-reaching unity of science projects. In this period of deep social and political divisions, scientists collaborated to unify sciences across disciplinary boundaries and to set up the international scientific community as a model for global political co-operation. They strove to align scientific and social objectives through rational planning and to promote unified science as the driving force of human civilization and progress. This volume explores the unity of science movement, providing a synthetic view of its pursuits and placing it in its historical context as a scientific and political force. Through a coherent set of original case studies looking at the significance of various projects and strategies of unification, the book highlights the great variety of manifestations of this endeavour. These range from unifying nuclear physics to the evolutionary synthesis, and from the democratization of scientific planning to the utopianism of H.G. Wells's world state. At the same time, the collection brings out the substantive links between these different pursuits, especially in the form of interconnected networks of unification and the alignment of objectives among them. Notably, it shows that opposition to fascism, using the instrument of unified science, became the most urgent common goal in the 1930s and 1940s. In addressing these issues, the book makes visible important historical developments, showing how scientists participated in, and actively helped to create, an interwar ideology of unification, and bringing to light the cultural and political significance of this enterprise.

Contents: Preface; Introduction, Harmke Kamminga and Geert Somsen; Meanings of scientific unity: the law, the orchestra, the pyramid, quilt and ring, Peter Galison; The unifying vision: Julian Huxley, evolutionary humanism and the evolutionary synthesis, Vassiliki Betty Smocovitis; Unity through experiment? Reductionism, rhetoric and the politics of nuclear science, 1918-40, Jeff Hughes; Scientists of the world unite: socialist internationalism and the unity of science, Geert Somsen; Government as scientific process in H.G. Wells’s world state, Rein de Wilde and Geert Somsen; Unifying science against Fascism: neuropsychiatry and medical education in the Spanish Civil War, Fernando SalmÃ³n and Rafael Huertas; ’To formulate a plan for better living’: visual communication and scientific planning in Paul Rotha’s documentary films, 1935-1945, Timothy Boon; Unifying science and human culture: the promotion of the history of science by George Sarton and Frans Verdoorn, Bert Theunissen; The unity of knowledge and the diversity of knowers: science as an agent of cultural integration in the United States between the two world wars, David A. Hollinger; McCarthyism in philosophy and the end of the unity of science ideology, George Reisch; Index.

Harmke Kamminga was a historian of science and medicine, most recently affiliated with the Wellcome Unit for the History of Medicine at the Department of History and Philosophy of Science, University of Cambridge, UK. She was the author of numerous publications on the history of biochemistry, laboratory medicine and origin of life theories. Her books include The Science and Culture of Nutrition, 1840–1940, edited with Andrew Cunningham, Molecularizing Biology and Medicine and Representations of the Double Helix, both edited with Soraya de Chadarevian. Harmke passed away in 2013.

Geert Somsen teaches history of science at Maastricht University and was Marie Curie fellow at Columbia University from 2014 to 2016. His research focuses on science and international relations. Recent publications include Neutrality in Twentieth-Century Europe: Intersections of Science, Culture and Politics after the First World War, edited with Rebecka Lettevall and Sven Widmalm. He is working on a new book, tentatively titled 'Science and World Order’: Uses of Science in Plans for International Government, 1899–1950.

Pursuing the Unity of Science: Ideology and Scientific Practice from the Great War to the Cold War