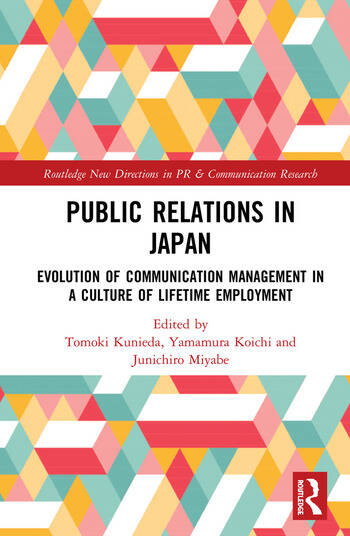 Public Relations in Japan: Evolution of Communication Management in a Culture of Lifetime Employment

Despite its rapid economic development, Japan lacks a large public relations industry and its role is viewed very differently from its Western counterparts. PR functions are handled predominantly in-house and a degree in a PR field is not a hiring requirement for those agencies which do operate. Mainstream PR history focusses entirely on its organizational aspects, and there are no Japanese PR "gurus" defining the field.

is the first in-depth scholarly discussion of what political, social and economic conditions affected the development of PR in Japan. Drawing on historical and empirical studies from multiple perspectives, it explores how and why public relations management and education in Japan is fundamentally informed by Japanese working practices. Central to this is the culture of lifetime employment which has created a fundamentally generalist approach to PR practice which discourages a high degree of professionalization.

Introduction: Culture of lifetime employment and the history of Japanese PR
Tomoki Kunieda

Chapter 2: The Democratization of Japan and the Introduction of American PR
Koichi Yamamura

Chapter 5: (Under-) Development of PR Industry and Profession
Yusuke Ibuki

Concluding Remarks: How general are we?
Tomoki Kunieda, Koichi Yamamura, and Junichiro Miyabe

Tomoki Kunieda, is an Assistant Professor at Taisho University, Japan. His research focus is on the history of mass communication, journalism and government public relations. He is a member of the JSCCS board of directors and chairperson of the Society’s Global Public Relations Theory Research Group. He has a doctorate in journalism from Sophia University.

Koichi Yamamura, PhD, is a visiting senior researcher at Waseda University, Japan. He is also a management and communication consultant with extensive experience in corporate communication, crisis management, corporate control, and technology communication. He has published case studies on hostile takeover defence and post crisis CSR activities. He has also co-authored an article and a book chapter on the historic evolution of PR in Japan.

Junichiro Miyabe is a Research Scholar at Research Faculty of Media and Communication, Hokkaido University, Japan. He has over 30-years of research experience at Nomura Research Institute, Ltd. He joined Hokkaido University in 2000 as a visiting professor and became a professor of international public relations in 2009 until 2015. He has published papers, among others, on human resource management and organizational structure of PR department.

Public Relations in Japan: Evolution of Communication Management in a Culture of Lifetime Employment