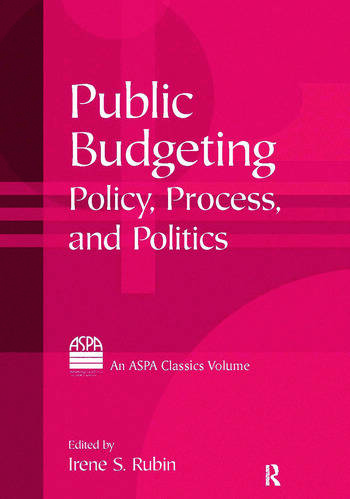 Some of the best writings on public budgeting and finance can be found in the journals that ASPA publishes or sponsors. For this volume editor Irene Rubin has brought together the best of these articles - emerging classics that address the most important theoretical and practical problems underlying public budgeting.The anthology is organized topically rather than historically, with an effort to delineate the issues needed to understand some of the more recent controversies in the field. Rubin's introductory essay and section openers frame the key issues and provide historical context for each article. The collection begins with descriptions of what public budgeting is, where it comes from, and what it is for. It moves on to the relationship between budget processes and outcomes, constraints on budgeting, the legal context in which it operates, and adaptations to those constraints such as contracting out.The book concludes with a discussion of the ethics and norms that underlie budgeting in a democracy. Throughout the anthology, the emphasis is on areas of disagreement and debate, so students can get involved and explore different viewpoints.