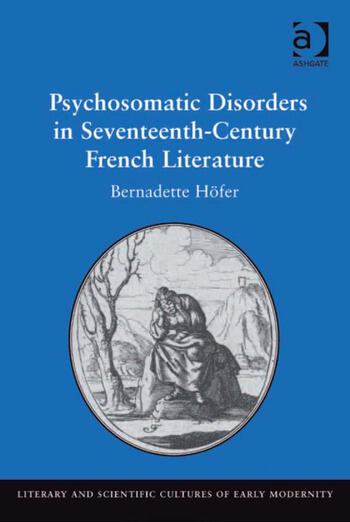 Bernadette HÃ¶fer's innovative and ambitious monograph argues that the epistemology of the Cartesian mind/body dualism, and its insistence on the primacy of analytic thought over bodily function, has surprisingly little purchase in texts by prominent classical writers. In this study HÃ¶fer explores how Surin, Molière, Lafayette, and Racine represent interconnections of body and mind that influence behaviour, both voluntary and involuntary, and that thus disprove the classical notion of the mind as distinct from and superior to the body. The author's interdisciplinary perspective utilizes early modern medical and philosophical treatises, as well as contemporary medical compilations in the disciplines of psychosomatic medicine, neurobiology, and psychoanalysis, to demonstrate that these seventeenth-century French writers established a view of human existence that fully anticipates current thought regarding psychosomatic illness.

Bernadette HÃ¶fer is an Assistant Professor of French at The Ohio State University, USA.

'Professor HÃ¶fer's new book represents an excellent piece of scholarship that is innovative, incisive, and very well written. The blending of scientific, philosophical, and literary perspectives is truly interdisciplinary in its approach and yields a great number of original interpretations essential to understanding key early modern French texts. Similarly, the agility with which the author moves from early modern to modern and contemporary thought is another sterling feature of her research. Without question, Professor HÃ¶fer is to be commended on such an ambitious and valuable project.' Russell Ganim, University of Nebraska-Lincoln, USA ’... this ambitious book is a thought-provoking and long-overdue consideration of the Cartesian mind-body split and seventeenth-century literary reactions. Despite our modern recognition that Descartes split the mind and body, there has been relatively little discussion of what that actually meant for people’s understanding of the body in the seventeenth century. As HÃ¶fer shows, Descartes’ philosophy was not straightforward, even to himself, and there were many competing ideas about the mind-body relationship. This book will contribute significantly to scholarship on the history of the body, which has long neglected to explore subjective bodily experience.’ British Society for Literature and Science ’HÃ¶fer’s book will certainly provide nourishment for those who share her interests. One closes it with unstinting admiration for the (almost) invisible translator.’ French Studies 'This is an exceptionally rich and well-researched study that crosses generic boundaries in an enlightening and convincing way. It will be an important point of reference for historians of medicine, culture, literature and philosophy.' Social History of Medicine