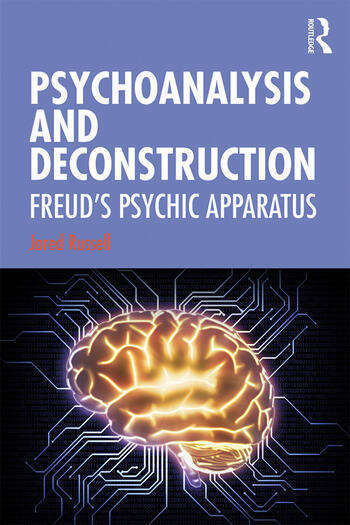 Psychoanalysis and Deconstruction: Freud's Psychic Apparatus demonstrates the relevance of deconstructive thinking for the clinical practice of psychoanalysis. Arguing that deconstruction has been misrepresented as a form of literary theory or a philosophy of language, the book puts Derrida, Heidegger and others working in the tradition of deconstruction into dialogue with debates in the contemporary psychoanalytic field.

Attempting to retrieve what was radical in Freud’s portrayal of the mind as a machine, Jared Russell stresses the importance of psychoanalysis for an understanding of the relationship between the human and its current hyper-technological environment. Interventions into contemporary debates address psychoanalytic concepts such as the nature of the clinical frame, the intersubjective dialogue, unconscious communication and the experience of time. Russell argues that deconstruction, and in particular Derrida’s work, can anticipate and help clarify ongoing developments at the cutting edge of psychoanalysis today.

will appeal not only to a philosophically informed audience but also to clinicians attempting to secure a place for psychoanalytic practice at the beginning of the twenty-first century.

Introduction; 1 Differance and psychic space 2 The spectrality of the clinical frame 3 A new metrics of clinical time 4 Psychoanalysis and pharmacology; Postscript: The trauma of the clinic of the telepathic machine

Jared Russell, PhD, is a psychoanalyst in private practice in New York City, USA. He is Managing Editor of The Undecidable Unconscious: A Journal of Deconstruction and Psychoanalysis (University of Nebraska Press) and the author of Nietzsche and the Clinic: Psychoanalysis, Philosophy, Metaphysics (Routledge 2016).

'No one writing today has seen the necessary intersection of psychoanalysis and deconstruction more lucidly and comprehensively than Jared Russell. Discussing a wide range of psychoanalytic writers, Russell provides an essential education in how and why these bodies of thought have always been in dialogue, and how and why the future of psychoanalysis depends upon this dialogue. This is a must read for anyone working in these fields.'-Alan Bass, New School for Social Research, New York City, USA

'In an extraordinary work of deep reflection, Jared Russell offers an effective reading experiment with a remarkable outcome. Russell reads deconstruction and psychoanalysis alongside one another to rehabilitate a Freudian materialistic vocabulary that psychoanalysts have wrongly abandoned. Focusing on Derrida’s reading of Freud, which (re)thinks the psyche as a machine, Russell makes a significant contribution to bringing psychoanalysis and philosophy together. He offers a deeper understanding of the practice of psychoanalysis, and of the philosophical grasp of the relationship between mind and subject.'-Rosaura Martínez-Ruiz, National Autonomous University of Mexico, Mexico City, Mexico