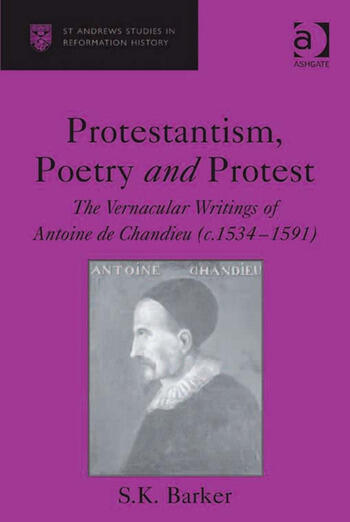 Antoine de Chandieu (1534-1591) was a key figure in the establishment and development of the French Protestant Church. Of all its indigenous leaders, he was perhaps closest to Calvin, and took a leading role in all the major debates about resistance, church order and doctrine of the Church. He was also a prodigious writer of political, religious and poetical works, whose output corresponds to a period of great turmoil in the progress of the French Church. Chandieu was uniquely placed not merely to engage and contribute to the great debates of the day, but also to record ongoing events. By illuminating his career, which meshed almost exactly with the French Wars of Religion, this book not only demonstrates the key role Chandieu's played in the development of French Protestantism, but also highlights the vital role of literature in shaping the religious experience of the wars. Offering the first systematic evaluation of Chandieu's vernacular works, this study questions many of the assumptions made about his motivations and aims, and how these developed over a thirty year period. His writings were contemporaneous with progress in the worlds of politics, theology and poetry, worlds in which he played a notable, if not well-documented, role. As a corpus, these works show the development of one man's understanding of his ideology over a lifetime actively spent in the pursuit of making that ideology a reality. Chandieu the young political hothead became Chandieu the defender of Calvinist theology, who in turn matured into Chandieu the elder statesman. The interest lies in where these changes occurred, how they were reflected in Chandieu's writing, and what they demonstrate about being Calvinist, and a representative of one's faith, in a time of disorder. As such, this book provides not only a reappraisal of the man and his publications, but presents an intriguing perspective on the development of French Protestantism during this turbulent time.

S.K. Barker is a teaching associate in the Department of History, Lancaster University, UK. The research for her doctoral thesis at the University of St Andrews and for this monograph was undertaken as part of the St Andrews French Vernacular Book Project.

’... Barker’s lively discussion sheds light on a multifaceted figure whose career spanned most of the Wars of Religion and who was of enormous importance in the French Reformation.’ French Studies ’[Barker] has deftly identified and drawn together the elementary threads in Chandieu’s life - poet and martyrologist, theologian and systematizer, pastor and theoretician of ecclesiastical polity. The result is an informative volume whose conclusions reach well beyond the life of a single individual in revealing the scope and character of the Reformation in France.’ H-France Review 'The scope of the book is thus vast; the main lines are clearly drawn, and S.K. Barker well justifies this integrated study of Chandieu and his period. This is a book that needed to be written.' Catholic Historical Review 'Barker's monograph contributes significantly to our understanding of the mosaic of French Reformed identity in the mid-to late-sixteenth century... Historians of the reformation, of French literature, of French history, of theology, and of church polity will benefit by reading this book. It fills a lacuna that has long deserved attention.' Calvin Theological Journal 'Barker's work is a substantial and valuable study for all scholars of early modern France, whether their specific orientation is theological, literary, or historical.' Sixteenth Century Journal 'Being a Protestant in sixteenth-century France was not a soft option, and in case one should need reminding, this book provides (among other things) a chronicle of how difficult even the Reformed Religion’s most successful adherents found it to be... [the book] contains more than enough well-presented detail to make it valuable and enjoyable to any student of French Protestantism and the Wars of Religion.' French History 'Indéniablement, cet ouvrage comble un vide. Une bonne monographie consacrée Ã  Antoine de Chandieu, cette figure centrale du protestantisme franÃ§ais au temps des guerres de Religio