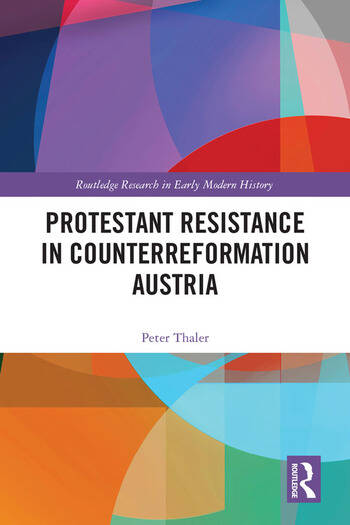 Protestant Resistance in Counterreformation Austria examines Austrian Protestants who actively resisted the Habsburg Counterreformation in the early seventeenth century. While a determined few decided early on that only military means could combat the growing pressure to conform, many more did not reach that conclusion until they had been forced into exile. Since the climax of their activism coincided with the Swedish intervention in the Thirty Years' War, the study also analyzes contemporary Swedish policy and the resulting Austro-Swedish interrelationship. Thus, a history of state and religion in the early modern Habsburg Monarchy evolves into a prime example of histoire croisée, of historical experiences and traditions that transcend political borders.

The book does not only explore the historical conflict itself, however, but also uses it as a case study on societal recollection. Austrian nation-building, which tenuously commenced in the interwar era but was fully implemented after the restoration of Austrian statehood in 1945, was anchored in a conservative ideological tradition with strong sympathies for the Habsburg legacy. This ideological perspective also influenced the assessment of the confessional period. The modern representation of early modern conflicts reveals the selectivity of historical memory.

2. A House Dividing: The Rise of Confessions in Early Modern Austria

4. The Thinker: Georg Erasmus von Tschernembl and the Ideology of Resistance

6. The Peasants: When Humble Subjects Mar the Mighty's Sleep

7. Beyond Habsburg: A Conclusion