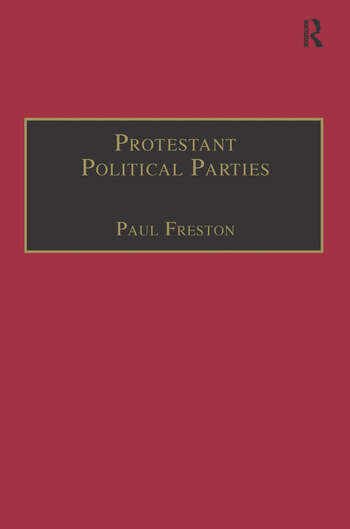 The recent global expansion of Protestant Christianity, and the increase in multiparty democracies, has led to the multiplication of Protestant political parties. One cannot talk of Protestant parties today without mentioning countries as diverse as Norway, Latvia, New Zealand, Indonesia, Zambia and Nicaragua. Whilst the well-established parties of the Netherlands and Scandinavia have long been studied, Paul Freston's groundbreaking book is the first global survey of this phenomenon. After looking at the traditional Protestant heartlands of Europe and the English-speaking world, Freston traces the spread of the Protestant party model to post-communist countries, the Pacific, the Muslim world, southern Africa and Latin America. He examines the circumstances favouring such parties, and the political projects they represent. The conclusion analyses the diversity of Protestant parties due to different interpretations of Christian politics and varied contexts. This unique book will interest specialists and non-specialists, across disciplines and in many parts of the world.

Paul Freston is Professor of Sociology at the Federal University of Sao Carlos, Brazil.

'I think it would be true to say that nobody else has Paul Freston's grasp of this complex and growing field. He has a firm grasp of complicated issues, a grounding in contemporary political sociology, and a capacity to present data and argument clearly'. David Martin, Emeritus Professor of Sociology, LSE '... a valuable resource for understanding the diverse range of Protestant movements throughout the world. Freston writes in a non-academic fashion which makes the book accessible to the general reader.' DenkWijzer ’Freston's portrayal is an achievement that I think virtually nobody else could pull off. It is rare that a scholar will be motivated enough to collect this much information about obscure and distant efforts at religious politics without having a strong agenda of his own... Protestant Political Parties, like Freston's previous work, pushes us to stop reading the past into the present, and instead develop our theorizations from complex emprical reality.’ Sociology of Religion ’... this volume appears destined to become the standard work on the subject.’ Evangelical Review of Society and Politics