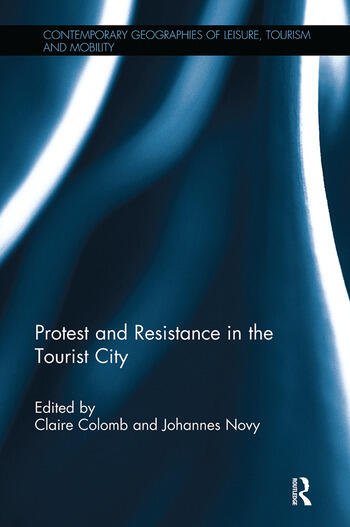 Protest and Resistance in the Tourist City

Across the globe, from established tourist destinations such as Venice or Prague to less traditional destinations in both the global North and South, there is mounting evidence that points to an increasing politicization of the topic of urban tourism. In some cities, residents and other stakeholders take issue with the growth of tourism as such, as well as the negative impacts it has on their cities; while in others, particular forms and effects of tourism are contested or deplored. In numerous settings, contestations revolve less around tourism itself than around broader processes, policies and forces of urban change perceived to threaten the right to ‘stay put’, the quality of life or identity of existing urban populations.

This book for the first time looks at urban tourism as a source of contention and dispute and analyses what type of conflicts and contestations have emerged around urban tourism in 16 cities across Europe, North America, South America and Asia. It explores the various ways in which community groups, residents and other actors have responded to – and challenged – tourism development in an international and multi-disciplinary perspective. The title links the largely discrete yet interconnected disciplines of ‘urban studies’ and ‘tourism studies’ and draws on approaches and debates from urban sociology; urban policy and politics; urban geography; urban anthropology; cultural studies; urban design and planning; tourism studies and tourism management.

This ground breaking volume offers new insight into the conflicts and struggles generated by urban tourism and will be of interest to students, researchers and academics from the fields of tourism, geography, planning, urban studies, development studies, anthropology, politics and sociology.

1. Urban tourism and its discontents: an introduction

2. No conflict? Discourses and management of tourism-related tensions in Paris

3. The selling (out) of Berlin and the de- and re-politicization of urban tourism in Europe’s ‘Capital of Cool’

5 Density wars in Silicon Beach: the struggle to mix new spaces for toil, stay and play in Santa Monica, California

9. The “No Grandi Navi” campaign. Protests against cruise tourism in Venice

12. Attracting international tourism through mega-events and the birth of a conflict culture in Belo Horizonte

13. The right to Gaudí. What can we learn from the commoning of Park Güell, Barcelona?

15. The abrupt rise (and fall) of creative entrepreneurs: socio-economic change, the visitor economy and social conflict in a traditional neighbourhood of Shanghai

16. The Living vs. the dead in Singapore: contesting the authoritarian tourist city

17. “Fantasies of antithesis”: Assessing Hamburg’s Gängeviertel as a tourist attraction

Claire Colomb is Reader (Associate Professor) in Planning and Urban Sociology at the Bartlett School of Planning, University College London (UK), and holds a first degree in Politics and Sociology (Institut d’Études Politiques de Paris, France) and a PhD in Planning (University College London). Her research interests cover urban and regional governance, planning and urban regeneration in European cities, urban social movements, European spatial planning and territorial cooperation, and comparative planning. She is the author of Staging the New Berlin: Place Marketing and the Politics of Urban Reinvention (Routledge 2011).

Johannes Novy is Lecturer (Assistant Professor) in Spatial Planning in the School of Planning and Geography at Cardiff University (UK). He studied urban planning and urban studies in Germany, Italy and the United States and holds a PhD in Urban Planning from Columbia University, New York. His research interests cover urban and planning theory, urban (development) politics, urban tourism and leisure consumption. He co-edited Searching for the Just City (Routledge 2009).

Protest and Resistance in the Tourist City