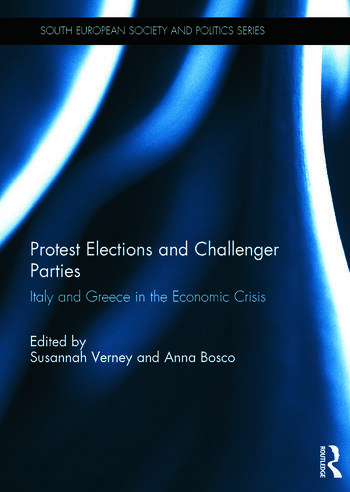 Protest Elections and Challenger Parties: Italy and Greece in the Economic Crisis

Both in Greece in 2012 and Italy in 2013, it took two elections to form a government. A repeat parliamentary contest was required in Greece and the unprecedented re-election of the outgoing President of the Republic in Italy before a cabinet could be formed. Against a background of economic crisis and national austerity, both countries experienced ‘protest elections’ in which the overriding concern for an unusually large proportion of voters was not to choose a government but to express dissent. The outcome included record-breaking electoral volatility, the decline of bipolarism, the startling rise of challenger parties and the transformation of national patterns of government formation, including experiments with grand coalitions and technocrat-led cabinets. These developments sent shock waves through Europe and beyond, suggesting Southern Europe might be drifting towards ungovernability.

The volume offers analyses of the key electoral contests at the parliamentary, presidential and local government levels, complemented by special studies of two key challenger parties, Beppe Grillo’s Five Star Movement in Italy and Golden Dawn in Greece. An introductory comparative overview traces the process of convergence between the political systems of Italy and Greece which appears to have been triggered by the economic crisis.

This book was published as a special issue of South European Society and Politics.

1. Living Parallel Lives: Italy and Greece in an Age of Austerity  Susannah Verney and Anna Bosco

3. A Landlord’s Notice to Quit: The May 2012 Municipal Elections in Italy  James L. Newell

6. In the Shadow of Grexit: The Greek Election of 17 June 2012  Sofia Vasilopoulou and Daphne Halikiopoulou

7. The Rise of Golden Dawn: The New Face of the Far Right in Greece  Antonis A. Ellinas

Protest Elections and Challenger Parties: Italy and Greece in the Economic Crisis