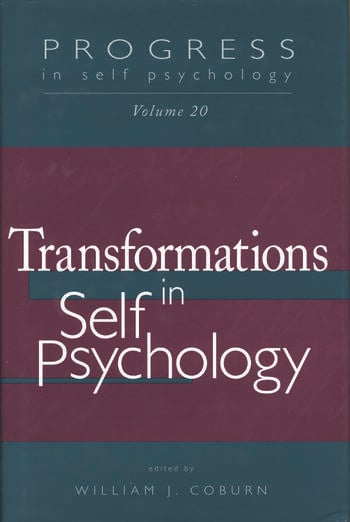 Transformations in Self Psychology highlights the manner in which contemporary self psychology has become, in the words of series editor William Coburn, "a continuing series of revolutions within a revolution."  Of special note are contributions that explore the bidirectional influences between self psychology and other explanatory paradigms.  The volume begins with Stern's thoughtful attempt to integrate self-psychological and relational perspectives on transference-countertransference enactments.  Fosshage and Munschauer's presentation of a case of "extreme nihilism and aversiveness" elicits a series of discussions that constructively highlights divergent perspectives on the meaning and role of enactment in treatment and on the so-called empathy/authenticity dichotomy.

The productive exploration of theoretical differences also enters in the redefinition of notions of gender and sexuality, a topic of increasing interest to self psychologists.  Differing perspectives, which give rise to differing clinical emphases, emerge in the exchanges of Clifford and Goldner, and of VanDerHeide and Hartmann.  The special "contextualist" demands of work with intercultural couples foster a more integrative sensibility, with self-psychological borrowings from interpretive anthropology  and attachment theory.

Clinical contributors to Volume 20 explore manifestations of a tension that permeates all analytic work: that between the patient's newly emerging ability to expand the self in growth-consolidating ways and the countervailing dread to repeat.    Enlarged by Malin's personal reflections of "Fifty Years of Psychoanalysis" and by book review essays focusing on the writings of Lachmann and Stolorow, respectively, Transformations in Self Psychology bespeaks the continuing vitality of contemporary self psychology.

William J. Coburn, Ph.D., Psy.D., is Training and Supervising Analyst, Faculty, and Board Director at the Institute of Contemporary Psychoanalysis, Los Angeles, and is Editorial Board Member of Psychoanalytic Inquiry.  He is Member of the International Council of Psychoanalytic Self Psychology and Board Member of the Association for Autonomous Psychoanalytic Institutes.  The recipient of the 1999 Daphne S. Stolorow Memorial Essay Award and the 2000 Karl Menninger Memorial Essay Award, he has published and presented numerous articles on countertransference, intersubjectivity, supervision, and complexity theory.