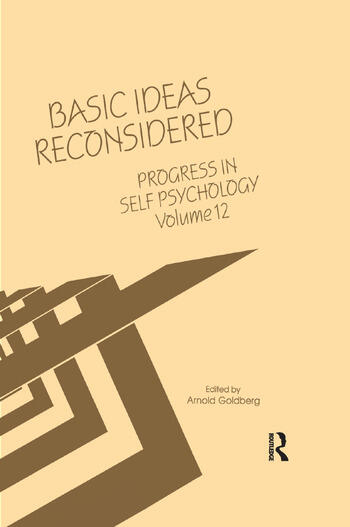 Volume 12 of the Progress in Self Psychology series begins with reassessments of frustration and responsiveness, optimal and otherwise, by MacIsaac, Bacal and Thomson, the Shanes, and Doctors. The philosophical dimension of self psychology is addressed by Riker, who looks at Kohut's bipolar theory of the self, and Kriegman, who examines the subjectivism-objectivism dialectic in self psychology from the standpoint of evolutionary biology. Clinical studies focus on self- and mutual regulation in relation to therapeutic action, countertransference and the curative process, and the consequences of the negative selfobject in early character formation. A separate section of child studies includes a case study exemplifying a self-psychological approach to child therapy and an examination of pathological adaptation to childhood parent loss. With a concluding section of richly varied studies in applied self psychology, Basic Ideas Reconsidered promises to be basic reading for all students of contemporary self psychology.

Rowe, Jr., Introduction: Notes on the Integration, Reformulation, and Development of Kohut's Contributions. Part I: Frustration and Responsiveness. MacIsaac, Optimal Frustration: An Endangered Concept. Bacal, Thomson, The Psychoanalyst's Selfobject Needs and the Effect of Their Frustration on the Treatment: A New View of Countertransference. Shane, Shane, Self Psychology in Search of the Optimal: A Consideration of Optimal Responsiveness, Optimal Provision, Optimal Gratification, and Optimal Restraint in the Clinical Situation. Doctors, Notes on the Contribution of the Analyst's Self-Awareness to Optimal Responsiveness. Part II: Philosophical Issues. Riker, The Philosophical Importance of Kohut's Bipolar Theory of the Self. Kriegman, On the Existential/Subjectivism-Scientific/Objectivism Dialectic in Self Psychology: A View from Evolutionary Biology. Part III: Clinical. Lachmann, Beebe, The Contribution of Self- and Mutual Regulation to Therapeutic Action: A Case Illustration. Livingston, Countertransference and Curative Process with "Nondifficult" Patients. Gehrie, Empathy to Broader Perspective: A Technical Approach to the Consequences of the Negative Selfobject in Early Character Formation. Part IV: Child Studies. Suth, A Self-Psychological Approach to Child Therapy: A Case Study. Shane, Discussion of "A Self-Psychological Approach to Child Therapy: A Case Study." Hagman, Flight from the Subjectivity of the Other: Pathological Adaptation to Childhood Parent Loss. Part V: Applied. Baker, Baker, A Self-Psychological Approach to ADHD in Adults: A Paradigm to Integrate the Biopsychosocial Model of Psychiatric Illness. Palumbo, Discussion of "A Self-Psychological Approach to ADHD in Adults." Rector, The Function of Early Selfobject Experiences in Gendered Representation of God. Crawford, The Severed Self: Gender as Trauma. Pangerl, Self Psychology: A Feminist Re-Visioning.

Arnold Goldberg, M.D., is the Cynthia Oudejan Harris, M.D. Professor, Department of Psychiatry, Rush Medical College in Chicago, and Training and Supervising Analyst, Institute for Psychoanalysis, Chicago. He is the author of a number of books, including Being of Two Minds: The Vertical Split in Psychoanalysis (TAP, 1999) and Errant Selves: A Casebook of Misbehavior (TAP, 2000).