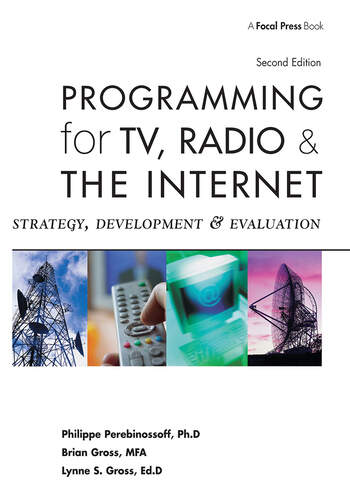 Where do program ideas come from? How are concepts developed into saleable productions? Who do you talk to about getting a show produced? How do you schedule shows on the lineup? What do you do if a series is in trouble? The answers to these questions, and many more, can be found in this comprehensive, in-depth look at the roles and responsibilities of the electronic media programmer. Topics include: Network relationships with affiliates, the expanded market of syndication, sources of programming for stations and networks, research and its role in programming decisions, fundamental appeals to an audience and what qualities are tied to success, outside forces that influence programming, strategies for launching new programs or saving old ones. Includes real-life examples taken from the authors' experiences, and 250+ illustrations!

Dr. Lynne S. Gross has taught radio and television production at a number of universities in both the United States and abroad. She has published 11 books and numerous articles which have appeared in Billboard, Radio Ink, Feedback and the Journal of College Radio. Dr. Gross has served as President of the Broadcast Education Association and was awarded its Distinguished Education Service Award in 1997. Professionally, she worked as Director of Programming for Valley Cable TV and has produced hundreds of radio and television programs.
Brian Gross, MFA, is a multimedia and Internet developer, critically-acclaimed composer, visual artist and published writer. He has been a Professor in the Radio, Television and Film, as well as the Communications departments at California State University at Fullerton, and has developed community-based initiatives to reach at-risk youth through new media. His work has been featured in galleries, performance venues and on radio throughout the United States and Europe.
Philippe Perebinossoff is a member of the Radio, Film & Television faculty at California State University-Fullerton, where he teaches a variety of critical studies courses. He is a former ABC television executive, having been both a network censor and a programming executive, supervising the development of over 200 television movies, including the Oprah Winfrey Presents franchise (such as the Emmy award winning Tuesdays with Morrie). It's important to him that students and industry professionals are able to reconcile ethical maxims in real world situations within the workplace, prompting the writing of this text.