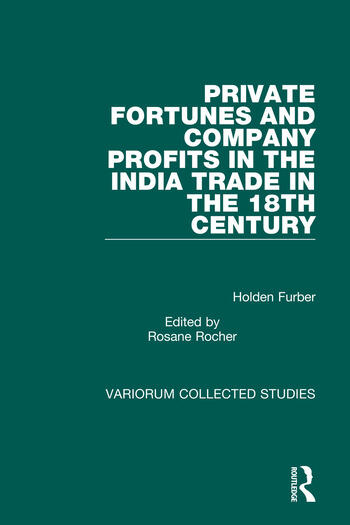 This collection of essays, two of which appear in print for the first time, documents the late Holden Furber’s discovery that private ventures, most manifestly deployed in the ’country trade’ between Asian ports, played a major role in the European expansion in India before the age of empire. Furber vividly describes how individual entrepreneurs used their positions with East India Companies to build personal fortunes, and how these private endeavours, for which the English East India Company gave more latitude, ultimately worked to the benefit of British power in India. One of the continuing strengths of his work remains its use of archival sources, not only British, but also other archival records, in particular those of The Netherlands and Scandinavia. The essays also highlight important connections, between chartered and ’clandestine’ trade, and piracy; of multinational private investments in the increasingly dominant East India Company; and between the trade of the Indian Ocean and Pacific worlds.

Contents: An abortive attempt at Anglo-Spanish cooperation in the Far East in 1793; The beginnings of American trade with India 1784-1812; The united company of merchants of England trading to the East Indies 1783-96; Madras in 1787; The overland route to India in the 17th and 18th centuries; The East India Company’s financial records; In the footsteps of a German Nabob: William Bolts in the Swedish archives; Bombay presidency in the mid-18th century; Glimpses of life and trade on the Hugli 1720-1770; Madras Presidency in the mid-18th century; The growth of British power in India 1708-1748; The India trade in the Pacific through two centuries 1600-1800; Major Forbes Ross MacDonald and the Arab world: Britain, India and the Middle East 1791-1798; The history of East India companies: general problems; Index.

'This commemorative collection of papers is justified by present interest as well as intrinsic value...Furber shows us how history can be, indeed should be, an art as well as a science, even amid the toil of opening up a new field of study.' The Scottish Historical Review 'Although the last of Holden Furber’s major writings appeared in the mid-1970s, his work has not only been very influential in the past but is still widely consulted. A collection of his essays, with the additional bonus of two pieces never previously published, is therefore most welcome.' The International History Review, Vol. XX, No. 2 'As ever, Variorum has provided a great service to scholars and students by publishing the collected works of a leading historian, in this case Holden Furber (1903”93) who, over the course of a lengthy career, established himself as an authority on European trade and imperialism in Asia during the eighteenth century. Our debt to Variorum and the editor is increased considerably on this occasion, because this collection of 14 articles and papers produced by Furber between 1935 and 1976 is drawn from a wide range of often inaccessible publications and includes two items published here for the first time. We are presented with a body of work which, in its totality, represents a major contribution to analysis of the dynamic forces behind, and the form taken by, the European presence in the East.' Journal of Imperial and Commonwealth History, Vol. 26, No. 3 '... an important book. Full of sympathetic insights, written with enjoyment and scrupulous scholarship, it contains the mature reflections of a master, of his sources and of this craft.' The Mariner's Mirror