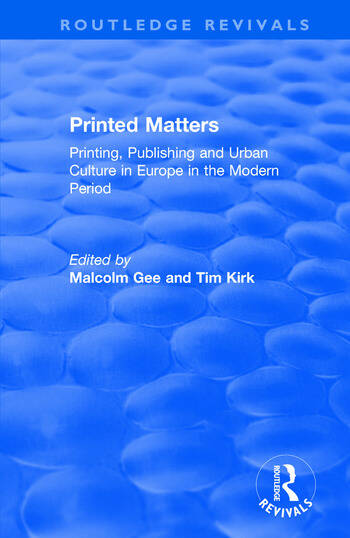 Printed Matters: Printing, Publishing and Urban Culture in Europe in the Modern Period

This title was first published in 2002: Since the invention of printing in the mid-fifteenth century the production, distribution and consumption of printed matter have been the principal means through which new ideas and representations have been spread. In recent times cultural historians have taken a growing interest in the previously somewhat isolated field of book history, shifting the study of printing and publishing into the centre of historical concern. This study of print and printing culture has naturally led historians to a concern with its urban context. The urban environment was fundamental to the development of printing from the outset, since it was in towns that the necessary combination of technical and entrepreneurial competencies were located, and where a growing demand for printed texts was to be found. Print permeated the urban experience at every level, and formed the chief means by which its ideas, values and beliefs were exported to the rest of society. In this way print promoted the broader urbanisation of society, by spreading urban attitudes and ideas beyond the limits of the city. It is with the urban cultural environment that this volume is primarily concerned, underlining the centrality of printing and publishing to the understanding of urban culture. Focusing particularly on post 1800 France and Germany, it considers a wide range of printed matter and engages with a number of recurrent historical issues, such as the role of printing in urban economies, the construction of metropolitan identities and the testing of moral boundaries.

Contents: Preface; Introduction, Malcolm Gee and Tim Kirk; Rouen and its printers from the 15th to the 19th century, Jean-Dominique Mellot; Lyons’ printers and booksellers from the 15th to the 19th century, Dominique Varry; Gavarni’s Parisian population reproduced, David W.S. Gray; The literary dangers of the city: policing 'immoral books' in Berlin, 1850-1880, Sarah L. Leonard; Readers, browsers, strangers, spectators: narrative forms and metropolitan encounters in 20th-century Berlin, Peter Fritzsche; Commercial spies and cultural invaders: the French press, Pénétration Pacifique and xenophobic nationalism in the shadow of war, Fae Brauer; Neutrality under threat: freedom, use and ’abuse’ of the press in Switzerland, 1914-19, Debbie Lewer; The ’cultured’ city: the art press in Berlin and Paris in the early 20th century, Malcolm Gee; Text and image in the construction of an urban readership: allied propaganda in France during the Second World War, Valerie Holman; Structures of the typescript, Catherine Viollet; Index.

'Ashgate is rapidly becoming a major publisher in the field of book history... This collection of essays is as enjoyable as it is wide-ranging. The editors have done a good job in assembling this unique book... Printed matters deserves to be read - and enjoyed - widely, not least because it reminds us through some delightful case-studies, of the power of print as, primarily, a medium of urban culture.' Journal of the Printing Historical Society

Printed Matters: Printing, Publishing and Urban Culture in Europe in the Modern Period