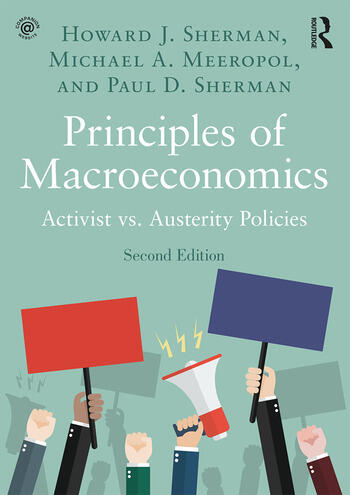 In the years since 2007 the U.S. economy has endured a severe financial crisis, a Great Recession, and continuing heavy unemployment. These events have led to increasing discontent among many people contributing to a substantial vote for Bernie Sanders and the election of Donald Trump. Meanwhile, Europe has witnessed the rise of nationalist parties and Brexit. In the face of these problems and events, economics must change.

provides an antidote to the standard macro texts offering multiple points of view instead of one standard line, a fact-based focus on the causes and cures of instability in economics, and an examination of inequality in the United States.

Readers are introduced to both the Classical view, which takes the conservative approach and argues for an austerity program to reduce the size of the government; and the Progressive view, which argues for government intervention to create a strong recovery. These ideas are applied to all the key macroeconomic topics including economic growth, business cycles, and monetary policy. Using the methodology of Wesley Mitchell and drawing on the work of Keynes, the authors also explore topics such as unemployment, the human cost of economic crashes, increasing inequality of income, and the history of capitalism.

This second edition includes new material on the Obama recovery, the crisis in the Eurozone, the rise of populism, and the current state of healthcare, education, and environmental issues in America to bring the text fully up to date. It will be of great interest to undergraduate students and particularly those studying the economics of the United States.

Howard J. Sherman is Professor Emeritus of Economics at University of California Riverside; and also visiting researcher at the Political Science Department, University of California Los Angeles, USA. He has published 21 books and 101 articles and has been described by The Wall Street Journal as "the leading Radical Economist of the United States."

Michael A. Meeropol taught at John Jay College of Criminal Justice of CUNY from 2009–2014, and previously taught at Western New England University from 1970–2008, where he chaired the Economics Department from 1996–2008. He has been an economics commentator on WAMC-FM radio since 2005.

Paul D. Sherman is a computer engineer in Silicon Valley, USA, with concerns for the problems of the people of the world.