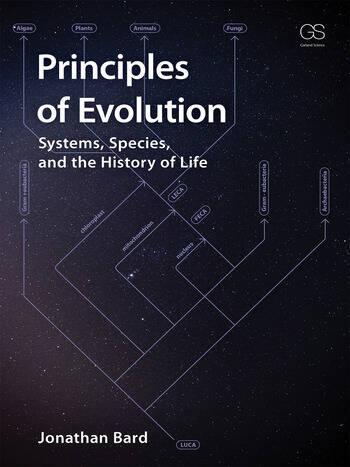 Principles of Evolution: Systems, Species, and the History of Life

Principles of Evolution covers all aspects of the subject. Following an introductory section that provides necessary background, it has chapters on the evidence for evolution that cover the fossil record, DNA-sequence homologies, and protein homologies (evo-devo). It also includes a full history of life from the first universal common ancestor, through the rise of the eukaryote and on to the major groups of phyla. This section is followed by one on the mechanism of evolution with chapters on variation, selection and speciation. The main part of the book ends with a chapter on human evolution and this is followed by appendices that expand on the making of fossils, the history of the subject and creationism.

What marks this book as different from others on evolution is its systems-biology perspective. This new area focuses on the role of protein networks and on multi-level complexity, and is used in three contexts. First, most biological activity is driven by such networks and this has direct implications for understanding evo-devo and for seeing how variation is initiated, mainly during embryogenesis. Second, it provides the natural language for discussing phylogenetics. Third, evolutionary change involves events at levels ranging from the genome to the ecosystem and systems biology provides a context for integrating material of this complexity.

The book assumes a basic grounding in biology but little mathematics as the difficult subject of evolutionary population genetics is mainly covered qualitatively, with major results being discussed and used rather than derived. Principles of Evolution will be an interesting and thought-provoking text for undergraduates and graduates across the biological sciences.

SECTION 2: THE EVIDENCE FOR EVOLUTION
4. The Fossil Record
5. Darwinian Descent With Modification: Evolutionary Taxonomy and Cladistics
6. The Anatomical Evidence for Vertebrate Evolution: From Fish to Birds
7. The Anatomical Evidence for Vertebrate Evolution: Mammals
8. The Genomic Evidence for Evolution
9. The First Three Billion Years of Life: From the First Universal Common Ancestor to the Last Eukaryote Common Ancestor and Beyond
10. Evo-devo 1: Embryos
11. Evo-devo 2: The Evidence From Functional Homologies

Principles of Evolution: Systems, Species, and the History of Life