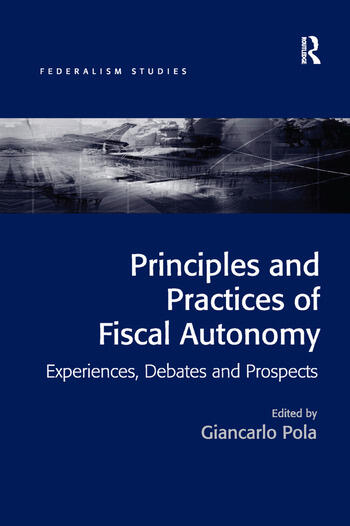 Principles and Practices of Fiscal Autonomy: Experiences, Debates and Prospects

This century has seen the continuation of long-term trends in the movement of the territorial boundaries of nation states alongside the emergence of new tensions. The repercussions of the Scottish referendum and the heightened urgency of the Catalonia question along with the continued economic problems faced by the Eurozone have given new energy and context to debates on institutional and fiscal autonomy. Assessing the impact of increasing calls for wider fiscal autonomy in the UK, Spain, Switzerland, Argentina, Brazil, Germany, Italy and the USA this volume updates and adds significant new context to the debate. Framing the discussion on fiscal autonomy and drawing out ethical considerations it portrays the problems connected with the devolution of responsibilities and financial resources to sections of the population, sometimes content to be part of a lower layer of government, sometimes aspiring to an asymmetrical position or total independence.

Giancarlo Pola is currently President of Ã‰upolis Lombardia, Regional Institute for Research, Training and Statistics (Lombardy, Italy). PhD in Economics in 1972 (University of York), Giancarlo Pola has been full professor of Public Finance at the University of Ferrara since 1981, and has also been adjoint professor of Public Economics at the Catholic University and Bicocca University in Milan. His main fields of interest have always been local finances and fiscal federalism. He has been member of Italy's Central Institutions like Cassa Depositi e Prestiti, Technical Commission for Public Finance and Parithetical Commission for the Implementation of Fiscal Federalism. His publications include contributions to Italian Journals like Rivista internazionale di Scienze sociali, to various annual Reports on local finance and also to internationally edited books.

’This volume provides a highly insightful view of recent developments in federalism around the world. Conflicts between the goals of increased political and fiscal autonomy of regions and the national interest in equity across regions, as described in chapters on the United Kingdom, Spain, Italy, Germany, Brazil, and Argentina, are particularly noteworthy. It will be of major interest both to scholars of federalism and the policy makers whose job it is to craft federalist solutions responsive not only to budgetary pressure but also to the evolving preferences of their citizenry.’ Howard Chernick, The City University of New York, USA ’Over the last decades, politicians and scientists have expressed growing interest in fiscal autonomy, decentralisation and federalism. Excellent case studies written by renowned scholars provide an outstanding overview of recent developments, interesting experiences and political perspectives in American and European countries with multilevel governments.’ Georg Milbradt, Chairman of the Board, Forum of Federations, Canada

Principles and Practices of Fiscal Autonomy: Experiences, Debates and Prospects