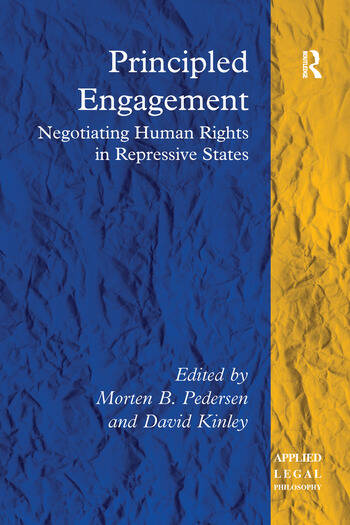 What is the best way to promote human rights in grossly repressive states when neither sanctions nor trade and investment have much effect? This book examines the concept of Principled Engagement as an often overlooked alternative strategy for alleviating human rights violations and improving the framework of human rights protection. Beginning with an explanation of the concept and a comparison with the alternatives of Ostracism and Business as Usual, the book argues that Principled Engagement deserves greater attention and explains how it works and what factors contribute to its success or failure. Case studies provide a rare scholarly inquiry into the effectiveness of the basic underlying ideas and analyse and assess specific cases, including from China, Burma, Zimbabwe and Liberia. Written by leading academics and practitioners, the book takes a general, comparative approach to human rights policy that teases out broad lessons about what works. Ultimately, this is a study that challenges scholars and practitioners alike to take a fresh look at how human rights are promoted internationally.

Morten B. Pedersen is Senior Lecturer in International and Political Studies at the University of New South Wales/Canberra (the Australian Defence Force Academy). He previously worked as Senior Analyst for the International Crisis Group in Myanmar (2001-06), and has held academic positions at the United Nations University in Tokyo and Australian National University. He has also served as a policy advisor for a number of governments and international organisations, including the UN, the World Bank, the European Commission and the Australian Government. His publications include some 40 titles on Burma/Myanmar, international statecraft and human rights, including Promoting Human Rights in Burma: A Critique of Western Sanctions Policies (Rowman & Littlefield, 2008), and (with Anna Magnusson) A Good Office? Twenty Years of UN Mediation in Myanmar (New York: International Peace Institute, 2012). He is currently working on a book on the dynamics and prospects of Myanmar’s democratic transition process. David Kinley holds the Chair in Human Rights Law at the University of Sydney, and is an Academic Panel member of Doughty Street Chambers in London. He has worked for nearly 20 years as a consultant and adviser on international and domestic human rights law in Vietnam, Indonesia, South Africa, Bangladesh, Thailand, Iraq, Nepal, Laos, China, the Pacific Islands, and Myanmar/Burma. He has worked for a wide range of international organizations, including the UN High Commissioner for Human Rights, the World Bank, the Ford Foundation, AusAID, and the Asia Pacific Forum of National Human Rights Institutions, as well as a number of transnational corporations and NGOs. He has also previously worked for three years with the Australian Law Reform Commission and two years with the Australian Human Rights Commission. His recent publications include Civilising Globalisation: Human Rights and the Global Economy (Cambridge University Press, 2009), as well as Corporations and Human

’As an early anti-apartheid campaigner I was a very reluctant convert to any kind of dealing with repressive regimes. But experience with Myanmar and elsewhere has taught me that careful, selective engagement can advance human rights in the hardest of situations. The case studies and foreign policy and aid strategies analysed here deserve the attention of all serious-minded policymakers. Principled Engagement is intelligent, lucidly written and compelling.’ Gareth Evans, Foreign Minister of Australia 1988-96, President of the International Crisis Group 2000-09, Chancellor of The Australian National University