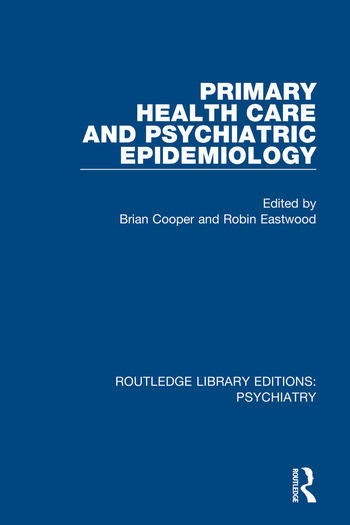 In the years prior to publication, primary health care had been gaining in significance as a setting both for research on mental illness in the general population and for the development of new preventive approaches in this field. The growing need for research had received impetus from the escalating costs of hospital-based health care, the re-structuring of health services in a number of countries, with an increased emphasis on community care and prevention, and the World Health Organization’s ‘Health for All’ campaign, in response to which a growing number of national planning documents had been published. These developments had already stimulated a new interest in the scope for epidemiological and evaluative investigations based on general medical practice.

This book, originally published in 1992, consists of selected contributions to the first international scientific meeting on this topic, held in Toronto in 1989. It is made up of five sections, dealing respectively with: the growth and development of a new research field; findings of psychiatric surveys in general practice in a number of different countries; specialist and generalist medical care for mental illness – issues of selection and referral; and specialist aspects of late-life mental disorders encountered in such research. The inclusion of reports from groups of workers in the USA, the UK, the Netherlands, Germany, Spain, Italy, Finland, Canada, Australia and other countries testifies to the rapid spread of interest in these questions.

With the exception of the first two chapters, which sketch the background of public-health and general-practice epidemiology, all the contributions are focused on general practice as a field laboratory for study of the occurrence, distribution, diagnostic composition and risk factors of psychiatric illness in unselected populations, and present data, largely unpublished, from the authors’ own projects. These findings confirm the importance of research in general practice as a major growing-point of social psychiatry and provide guidelines for further progress in the years ahead.

This book will still be an invaluable source of reference to all psychiatrists, psychologists, general practitioners and health care professionals concerned with mental disorders in the wider community.