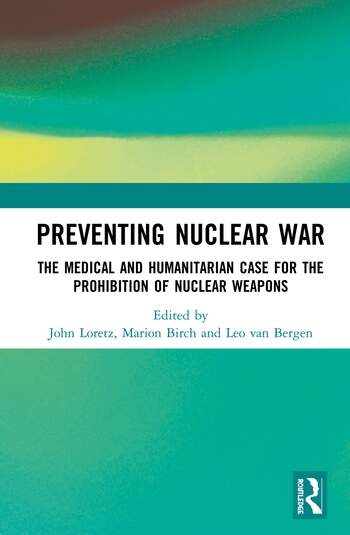 Preventing Nuclear War: The Medical and Humanitarian Case for the Prohibition of Nuclear Weapons

Preventing Nuclear War: The Medical and Humanitarian Case for the Prohibition of Nuclear Weapons provides a window into the work of the International Physicians for the Prevention of Nuclear War (IPPNW) health professionals, advocates and activists as they persuaded diplomats, parliamentarians, the media, and the public to ban nuclear weapons.

Why are doctors speaking out about nuclear weapons and nuclear war, an issue that seems to be the exclusive province of diplomats, politicians, and security experts? This volume offers an answer in the unique perspective of health professionals on the nature of nuclear weapons, their medical and humanitarian consequences, and the responsibility to prevent what cannot be treated. On 7 July 2017, the UN successfully concluded negotiations on the Treaty on the Prohibition of Nuclear Weapons. The "ban treaty," emerged from a "humanitarian initiative" that shifted the focus away from deterrence-based rationales used by the nuclear-armed states and toward an evidence-based understanding of the existential threat nuclear weapons pose to humanity. Since 1980, IPPNW has been the leading medical organization primarily dedicated to the abolition of nuclear weapons. With its civil society partners in ICAN—the International Campaign to Abolish Nuclear Weapons—IPPNW brought the scientific evidence about nuclear weapons and nuclear war into the treaty negotiations and into the language of the TPNW itself. The contributors to this volume show the dedication and diverse strategies that have together made up a unified and very significant contribution to ridding the world of nuclear weapons.

Reflecting honestly on what has been learnt and have the potential to contribute to wider learning outside the anti-nuclear community, Preventing Nuclear War: The Medical and Humanitarian Case for the Prohibition of Nuclear Weapons will be of great use to medical and health professionals, humanitarian professionals, and anyone wanting to work towards a more peaceful and equitable world. The chapters originally published as a special issue of Medicine, Conflict and Survival.

1. Towards abolition: a special issue from the International Physicians for the Prevention of Nuclear War

2. Consequences matter: why nuclear weapons had to be banned

3. My Journey before and after the birth of the Treaty for the Prohibition of Nuclear Weapons

5. Austria and its efforts towards the prohibition of nuclear weapons

6. Teaching about the Treaty to Prohibit Nuclear Weapons to three generations

Mary-Wynne Ashford and Jonathan Down

7. How Physicians for Social Responsibility - Finland has managed to grow and be active for over 35 years

9. Promoting the nuclear ban treaty in Germany - obstacles and opportunities

10. The antinuclear experience in Greece

11. Can Japan be a bridge-builder between deterrence-dependent states and nuclear weapon ban treaty proponents?

15. The influence of NVMP’s medical-humanitarian arguments on Dutch nuclear weapons politics: The Netherlands can make a difference in reaching a nuclear weapons-free world

20. A history of British health professionals working for the abolition of nuclear weapons

John Loretz retired as IPPNW Program Director in 2017. He represented the organization on the international steering group of ICAN, the 2017 Nobel Peace Laureate.

is a public health professional with extensive experience in countries affected by conflict.

is an independent researcher and medical historian.

Preventing Nuclear War: The Medical and Humanitarian Case for the Prohibition of Nuclear Weapons