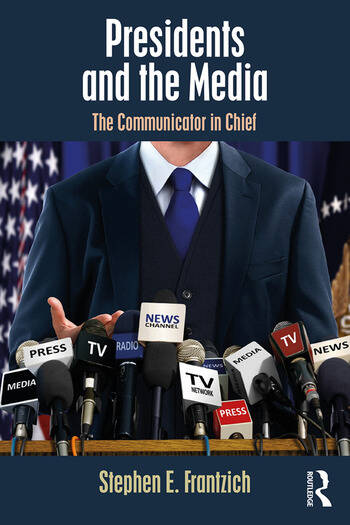 Presidents and the Media: The Communicator in Chief

Is Donald Trump’s "War on the Media" new news, fake news, or business as usual? Presidents have always "used" the media and felt abused by it. Tried and true vehicles such as press conferences, routine speeches and the State of the Union address have served presidents’ interests and received significant coverage by the print media. As new technologies have entered the media spectrum, the speed and pervasiveness of these interactions have changed dramatically. President Obama ushered in the social media presidency, while President Trump has become the tweeter-in-chief. This book shows how each of these developments affects what is communicated and how it is received by the public.

CHAPTER 1. Presidents and the Media in a Representative Democracy

CHAPTER 2. The President as a News Hook: The First "W"

CHAPTER 8. The President and Popular Media

CHAPTER 9. Ongoing Media Relationships and How to Deal with Them

Stephen E. Frantzich is Professor Emeritus of Political Science at the United States Naval Academy, where he was selected as outstanding civilian professor in 1990. He is the author of over two dozen books and has served as a consultant to the US Congress, Dirksen Center, C-SPAN, and a variety of foreign parliaments. He also runs Books for International Goodwill (www.big-books.org), which has distributed over 8 million books to underserved populations around the world.

Praise for Presidents and the Media

Timely and relevant amid cries of fake news, Stephen Frantzich’s thorough overview of the connection between the presidency and media shows how their relationship has existed and continues to evolve under the Trump Administration. This book is accessible to undergraduate students, and it is also a useful compendium for scholars of the presidency and news media.

Presidents and the Media: The Communicator in Chief is a thorough and thoughtful treatment of an increasingly important topic. It should be required reading for those who want to understand the 21st century version of the public presidency.

Stephen Frantzich’s compelling new book offers a wealth of important insights on the evolving relationship between modern American presidents and the media. This comprehensive account illuminates this symbiotic, tension-filled relationship from the perspectives of the nation’s chief executive, the media, and the public. Frantzich’s crisp writing and engaging analysis shed important light on the changing strategies and techniques that presidents and the media use in their efforts to inform and shape the opinions of the American people.

Presidents and the Media: The Communicator in Chief