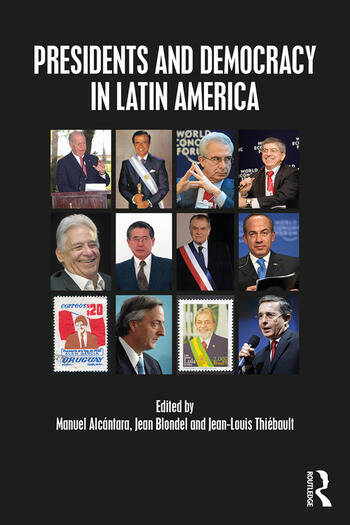 Presidents and Democracy in Latin America

This new textbook provides students with a comprehensive and accessible introduction to the presidents and presidential leadership in Latin America. Unlike other texts, Presidents and Democracy in Latin America integrates both political analysis and major theoretical perspectives with extensive country-specific material.

Part Two studies two presidents in each of six countries in the region which reflect the broad trends in the political and electoral life: Argentina, Brazil, Chile, Colombia, Mexico, and Peru. Each case study first provides the biographical background of the president; it outlines the political career of the president both inside and outside of a party, including at the local level; the popularity of the president at the time of the presidential election is given, as well as the mode of selection of the candidates (selection by party leaders only, by party members or by a primary). The relation of the president with the government or ministers, especially if there is a coalition government, is detailed.

This textbook will be essential reading for all students of Latin American Politics and is highly recommended for those studying executive politics, political leadership, and the state of democratic governance in Latin America.

3. The Character of the ‘Government’ in Latin American Presidential Republics

5. Mexico. Zedillo and Calderón: The Challenges of Governing under Adversity

7. The singularity of Peruvian Politics and the Role of Presidential Leadership. The Cases of Alberto Fujimori and Alan García

8. Presidential Leadership in a Robust Presidency: the Brazilian Case

9. Menem and Kirchner. The Two Faces of Peronism?

10. The Presidential Government of Chile

'Presidents and Democracy in Latin America is a timely and extremely relevant contribution to the study of the region’s politics and systems of government. Precisely because it focuses on the leadership styles of chief executives, the political cycles under which they rise to power, their personalities, ideological leanings, career paths and social background, as well as the way in which all of these factors impact governments, this book breaks new ground in scholarly research on presidentialism. Authored by stellar European comparativists and Latin American country experts, the chapters of this edited volume offer key insights into some of the most pressing issues of contemporary politics.' - Octavio Amorim Neto, Associate Professor, Brazilian School of Public and Business Administration

Presidents and Democracy in Latin America