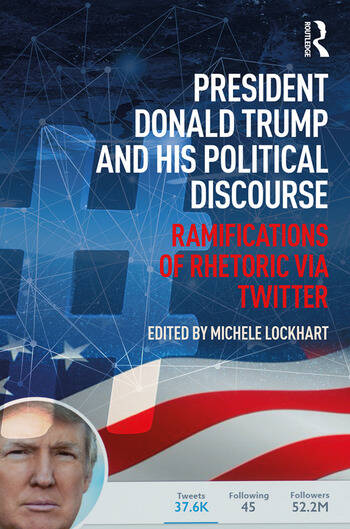 President Donald Trump and His Political Discourse: Ramifications of Rhetoric via Twitter

President Donald Trump and His Political Discourse brings together a diverse collection of perspectives on President Trump’s Twitter rhetoric. Truly unique in its in-depth exploration, the volume demonstrates the ways in which international and U.S. relations, media and "fake news," and marginalized groups, among other things, have been the subject of President Trump’s tweets. It also features qualitative–quantitative analyses, evaluating tweet patterns, broader language shifts, and the psychology of President Trump’s Twitter voice. The purpose of this collection is not only to analyze the language used but also to consider the ramifications of the various messages on both individual and global levels, for which Trump is both celebrated and criticized. Interdisciplinary in approach, this collection is a useful resource for students in political rhetoric and communication, international relations, linguistics, journalism, leadership studies, and more.

PART I: THE CAMPAIGN, THE TWITTERSPHERE, AND THE "NEW AGE" OF RHETORIC: TRUTH VERSUS REALITY
1. Seizing the Populist Rhetorical Toolkit: a Comparative Analysis of Trump and Clinton’s Discourse on Twitter during the 2016 U.S. Presidential Campaign by Francisco Seoane Pérez, Irene Asiaín Román, and Javier Lorenzo Rodríguez
2. Of Twit-storms and Demagogues: Trump, Illusory Truths of Patriotism, and the Language of the Twittersphere by Dawn F. Colley
3. The Dark Alchemy of Donald Trump: Re-inventing Presidential Rhetorics through Christian and "New Age" Discourses by Lance Cummings

PART II: POWER AND ABUSE ABROAD AND AT HOME: FOREIGN POLICY VIA TWITTERVERSE, "BULLSHIT," AND "NUT JOB"
4. President Trump’s Tweets on the Middle East, North Korea, and Russia: the Constructive and the Unconstructive by Anish Dave
5. The Paradox of Dissent: Bullshit and the Twitter Presidency by Christopher Carter
6. Crazy, Insane, Nut Job, Wacko, Basket Case, and Psycho: Donald Trump’s Tweets Surrounding Mental Health Issues and Attacks on Media Personalities by Sarah Smith-Frigerio and J. Brian Houston
7. Habitat for Inhumanity: How Trolls Set the Stage for @realDonaldTrump by Erec Smith

PART III: "FAKE NEWS" AND MADNESS: READ, RE-TWEET, AND TEACH ALL ABOUT IT
8. Tweet the Press: Effects of Donald Trump’s "Fake News!" Epithet on Civics and Popular Culture by Dorian Hunter Davis and Aram Sinnreich
9. Setting the "Fake News" Agenda: Trump’s Use of Twitter and the Agenda-Building Effect by Rod Carveth
10. Digital Sophistry: Trump, Twitter, and Teaching about Fake News by Bryan A. Lutz

Michele Lockhart, PhD, is a faculty member in the School of Arts, Technology, and Emerging Communication at The University of Texas at Dallas and serves as the Director of Programs and Accreditation for Academic Affairs and Office of the Provost. Her recent publications, co-edited with Kathleen Mollick, include Political Women: Language and Leadership (2013), Global Women Leaders: Studies in Feminist Political Rhetoric (2014), and Hillary Rodham Clinton and the 2016 Election: Her Political and Social Discourse (2015).

As the Twitter president, Donald Trump has revolutionized how candidates and presidents interact with audiences domestically and globally. Michele Lockhart’s edited volume answers the call for serious study of Trump’s Twitter language and its impact, making President Donald Trump and His Political Discourse a timely addition to any classroom.

If you’re wondering how President Trump’s churning tweets are utterly redefining American political rhetoric, then this collection provides a sufficient and necessary baseline where, as Yeats warned, “the ceremony of innocence is drowned.” While social media isn’t always social, it’s always rhetorical, and — for this attentive editor and these critically engaged scholars — strangely beautiful.

President Donald Trump and His Political Discourse: Ramifications of Rhetoric via Twitter